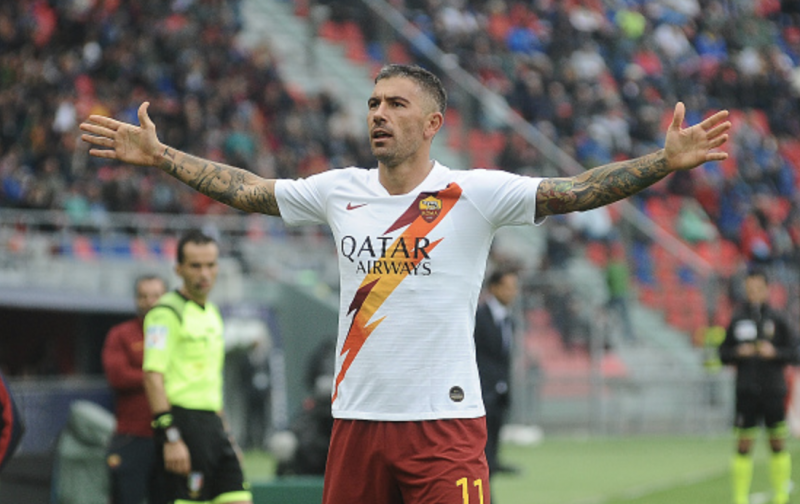 Edin Dzeko was the hero Roma as they gallantly fought to a 2-1 win with Bologna at the Stadio Renato Dall’Ara on Sunday afternoon, scoring with the last kick of the game.

Aleksander Kolarov initially put the Giallorossi ahead with a sublime freekick 49 minutes in, but that didn’t last long as his foul led to a penalty for the home side which Nicola Sansone duly converted.

Gianluca Mancini was sent off near the end for after collecting two yellow cards and just as it looked like the game was heading for a draw, Dzeko gave Roma the three points right at the death.

As a result, Roma move fourth in the Serie A table, one point behind Napoli and four adrift of leaders Inter.

The opening 45 minutes was a war of attrition as both sides traded blows for control of the midfield, which meant that chances were few and far between.

Roma did have the better off them with Alessandro Florenzi having an effort deflected out by Mattia Bani, then Aleksander Kolarov driving a shot just wide of the post.

Almost immediately after the break a foul on Lorenzo Pellegrini allowed Kolarov to line up a freekick on the edge of the penalty area and he curled it over the wall into the top corner.

The moments later the Serb went from hero to villain as he fouled Roberto Soriano in the box at the other end, resulting in referee Luca Pairetto pointing to the spot. Sansone stepped up and levelled the scoreline.

Some great link up play between Andrea Poli, Mattia Destro and Soriano saw the midfielder get free in front of goal, but a miraculous save from Pau Lopez denied the Bologna No.10.

The game suddenly opened up and Destro broke free on the left and with the outside of his boot cross for Riccardo Orsolini at the back post, but he could only fire into the side netting.

Dzeko flashed a shot wide, but things took a turn for the worse for Roma with six minutes left as Mancini was shown a second yellow card for after appearing to elbow Federico Santander in the face.

Then in the 93rd minute, Bologna save away possession and Pellegrini got into the box on the right before floating a cross towards an unmarked Dzeko who made no mistake.