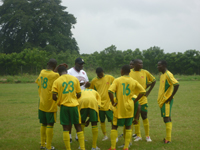 Premier League side Ebusua Dwarfs will embark on a training tour of Nigeria ahead of the new soccer season, MTNFootball.com understands.

Officials are yet to conclude the time-table for the pre-season tour.

This will afford the Cape-Coast based side the chance to test some of their newly signed players following an impressive display last season after five years in the second tier.

The club will play a series of high-profile friendly matches during their stay in the West African country.

The club embarked on a training tour of Egypt at the beginning of last season with their then Egyptian trainer Mohammed Lofty Mohamed Al Mahady.