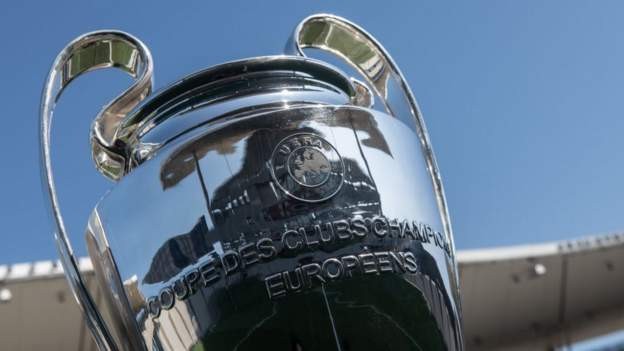 European football bosses say they are "exploring different ideas" amid reports that some Champions League games could be played outside Europe.

The Athletic claimed earlier this weekexternal-link that clubs are open to holding matches in the United States, China and Middle East.

But the idea was dismissed on Tuesday by Uefa president Aleksander Ceferin.

"We didn't agree anything," said Al-Khelaifi. "What we are trying to do is explore different ideas to grow and develop the competition, we have the right to do that.

"Why not look at all the opportunities to grow and develop and see if it makes sense or not?"

Speaking at a news conference following the ECA's General Assembly in Turkey, Ajax chief executive Edwin van der Sar said it was 'not new' that domestic matches are played abroad, citing the Italian Super Cup, which has been played in Qatar, China and Saudi Arabia, as one such example.

The ECA also welcomed representatives from Formula One to their two-day meeting in Turkey and have noted the success of the Netflix 'Drive to Survive' series in attracting new audiences to the sport.

It is thought an initial step would involve taking the annual European Super Cup to the US, which would not need Fifa's approval as it is a pre-season competition.

'We are not going to waste our time with this'Nasser Al-Khelaifi, centre, was speaking at the European Clubs' Association (ECA) general assembly in Turkey

Once again, Real Madrid, Barcelona and Juventus were absent from the meeting.

The three clubs are awaiting an interim judgement on their challenge to Uefa's status as the only body that can sanction a pan-European tournament.

That initial ruling is due in December and will give an indication about whether the trio, who refused to step back from the Super League concept that attracted such wide criticism in 2020, have any chance of success.

Whilst Van der Sar said it would be 'great' to have the three back within the ECA fold, Al-Khelaifi was more dismissive.

"We continue working without them," said the Paris St-Germain president. "If they want to come back they are welcome but we are not going to waste our time with this.

"We are moving on and do the best for our clubs. They do what they want. We know it [Super League] doesn't exist and it will never exist."

Important that girls can dream too

The ECA is expanding its scope within the women's game, with Olympiakos general manager Lina Souloukou appointed as the organisation's diversity representative.

She welcome the increased participation numbers and the growth of the sport.

However, whilst Van der Sar celebrated the increased domestic attendances in England following a triumphant European Championship, he said it is important smaller countries are not left behind.

"It is important that the rest of Europe develops also," he said.

"Lots of clubs (in Europe) are starting to play women's football. It is important girls have the possibility to dream to play in a full house.

"It is great the Women's Super League is benefitting from winning the title. Let's hope other countries are able to follow and the pace of develop picks up everywhere."