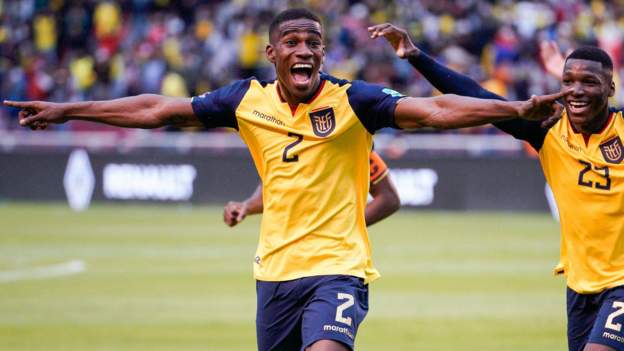 Felix Torres' second-half header earned Ecuador a draw against Brazil in an eventful World Cup qualifier which saw both teams have a player sent off.

Brazil, who have already qualified, went ahead through Casemiro's close-range effort in the fifth minute.

Ecuador keeper Alexander Dominguez was sent off for a reckless challenge after 15 minutes, before Brazil's Emerson Royal was dismissed five minutes later.

The hosts had a goal disallowed but Torres' late header rescued a point.

Ecuador are third in the 10-nation South American qualifying standings - the top four qualify automatically for the World Cup.

Brazil have already qualified for this year's finals in Qatar, along with Argentina.

Thursday's incident-packed game in Quito saw Brazil goalkeeper Alisson shown a red card on two occasions only for both to be rescinded by VAR.

Ecuador also had two penalty awards overturned by VAR - including one in second-half stoppage time.