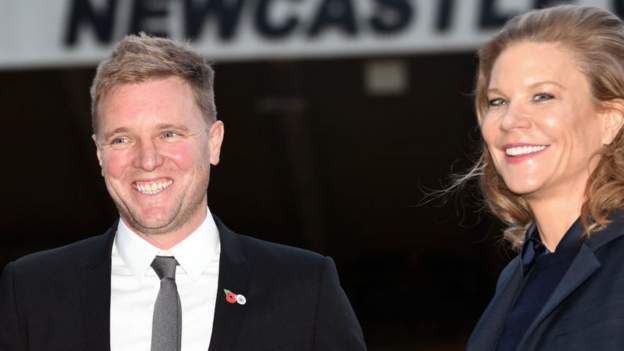 Newcastle's training trip to Saudi Arabia is a "football decision" and "for the benefit of the players", says manager Eddie Howe.

United head to the Middle East after Saturday's Premier League game against Leeds, with their next match on 8 February after the international break.

There "won't be any distractions", the players are "my only focus" added Howe.

The controversial takeover in October led to questions about whether it was an attempt "sportswash" the country's human rights record.

Having been appointed by the new owners in November, Howe said he did not know if he would meet the club's new chairman Yasir Al-Rumayyan, who is also chair of PIF, or Bin Salman.

He added: "There will be no distraction from my side, it's about the training and the players and being focussed on the next game. We are just doing it in a different environment to bring players together.

"The facilities and everything are going to be first class, we will train hard and that will be my only focus."

Newcastle's £305m takeover was one of the most controversial in the Premier League's history and came after an 18-month row between the new owners and the league about state interference.

The Kingdom has been accused of human rights abuses and piracy issues, but the takeover was eventually approved after the Premier League received "legally binding assurances" that Saudi Arabia would not control the club.

Human rights organisations have questioned that stance given Bin Salman is the chair of PIF.

Details of the trip are set to be confirmed, but Howe said that it was "worthwhile" given Newcastle's next game after Leeds will be against Everton on Tuesday, 8 February.

"It's all manageable," he said. "I don't think the distances are too far, and we have to take everything into account. We have a big gap to our next game, we are comfortable with players travelling.

"In terms of Covid, things will be tight. We will try and do some good work and come back with a united squad."