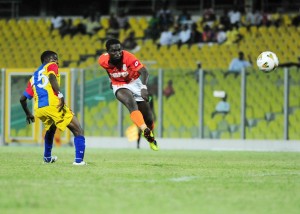 New Edubiase striker Emmanuel Baffoe insists his target is not to win the Goal King Award despite his rich scoring form so far in the Premier League.

Baffoe who started the season with an impressive hat-trick has maintained his top goal scorer crown with six goals from five matches.

His impressive run of scoring in every Premier League game was halted against Hearts of Oak over the weekend which has been blamed on referee Cecil Fleischer for disallowing what appeared a perfect goal.

Baffoe however says he is not keen on the Goal King crown come then end of the season but is only interested in helping his team secure wins.

â€œMy target is not to win the Goal King award even though I have scored a lot of goals this early,â€ he tells GHANAsoccernet.com.

â€œI am only happy to help my team win games of which hopefully will propel us to a better stranding on the Premier League table.â€

The new striking sensation is however being given a close chase by Asante Kotoko's leading striker Ahmed Toure who is on four goals.