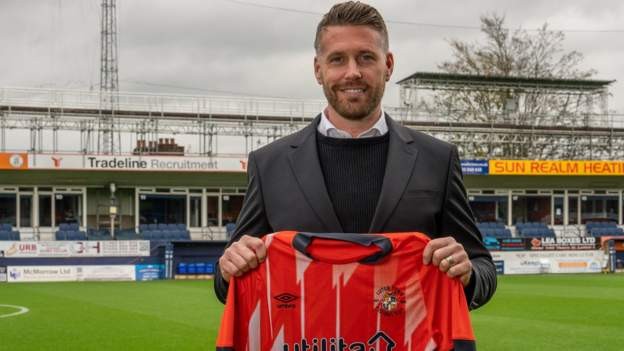 Because of the World Cup break, he will take charge against Middlesbrough on Saturday, 23 days after being named as Nathan Jones' successor.

The 39-year-old former Watford boss' new side are 11th in the Championship table and unbeaten in five games.

"It's been a strange time for everyone, unique, I think, to have this long a period off," Edwards said.

"I think some clubs will respond really well and others will maybe find it a little bit more difficult, so I'm hoping we respond in a really good way with performances, and hopefully results as well."

USA goalkeeper Ethan Horvath and Wales defender Tom Lockyer have been training this week following their return from Qatar and Edwards has been impressed with what he has seen from the entire squad.

"This is not a surprise because I could see it about them when I watched the previous games and when I spoke to Nathan and when I spoke to other people, but the honesty, the intensity they train with has been brilliant," he told BBC Three Counties Radio.

"It's really refreshing to work with this group. Every day they put a smile on your face and I've thoroughly enjoyed it. Obviously now it becomes more important because we get down to the games, that's what we do all the training for and I'm looking forward to it."

Edwards joined Watford after leading Forest Green Rovers to promotion from League Two, with the task of trying to return the club to the top flight following last season's relegation.

But he lost his job on 26 September as the Hornets opted to bring in former West Ham and West Brom boss Slaven Bilic to replace him.

He was, though, out of work for less than two months as Luton chose him to take the team forward following Jones' departure to Southampton.

They reached the play-offs under Jones last season and Edwards has no plans to "completely rip things up" and overhaul their playing style.

"It's a case of continuing to do the things that we do well - but there are a few key things that we've really gone after and really focused on (in training) and we'll hopefully see elements of that on Saturday," he said.

"It's been good to have a couple of weeks to really get to know the players as individuals, and for them to understand what we're about, and that we're not going to be making loads and loads of changes really quickly.

"Of course we want to evolve and build and grow and get better, but it's small steps at a time and (about) recognising that we are a good team. The lads have shown that over a long period of time in this league."

He continued: "In our job, you have to be a good sales person if there is anything you do want to tweak or change, we have to be able to sell that and we try to engage with them as well, get them to ask questions, because they're an intelligent group and we want their feedback as well."

Following the trip to Teesside, Luton have home games against Millwall and Norwich before ending the year at Queen's Park Rangers on 29 December.

And Edwards believes they are in a great position to mount another challenge for the top six in the second half of the campaign.

"The Championship's always an exciting league but those first 21 games have been so tightly packed, it's tightened the league up - anyone can beat anyone," he said.

"The group of players, the staff, have put us in a really good position and we want to be in the mix come the end.

"We have pushed them, but they are a really resilient group, they respond well to the hard work, they want to work hard, it's in their DNA, and I've been really pleased with where we've been able to push them to."