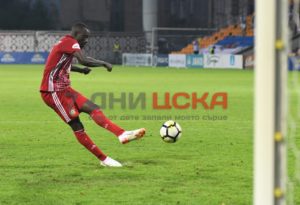 Ghana winger Edwin Gyasi suffered an injury for CSKA Sofia in their 2-1 defeat to FC Copenhagen in the first leg of the UEFA Europa League qualification on Thursday.

The skillful wideman, who was excellent for the Bulgarian in the 3-0 win over Dunav Ruse in the league over the weekend, was hoping to build on the performance against FC Copenhagen in Europe's second-tier club competition.

However, the 27-year-old's joy was short-lived after suffering an injury in the 36th minute of the encounter and was replaced by Portuguese midfielder Jorginho Intima.

The Danish side went on to claim 2-1 win courtesy goals from Denis Vavro and Kenan Kodro despite falling to an early minute strike by Maurides Roque Junior.

It remains to be seen whether the Ghanaian can recover in time for their Sunday's derby clash against Slavia Sofia.