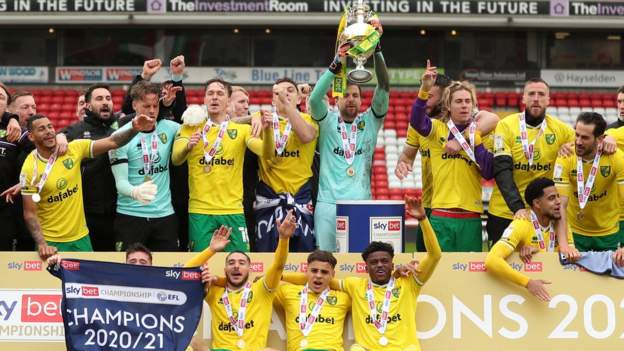 Did you pick Norwich City and Watford to bounce back up to the Premier League at the first time of asking last season?

Were Morecambe on your list to be promoted to the third tier for the first time?

Did Hull City and Cheltenham Town come into your thoughts to win the League One and League Two titles?

Either way, the slate has been wiped clean and you have the chance to look into your crystal ball once again.

Select the clubs you think will go up from the Championship, League One and League Two in the 2021-22 season, debate them with your friends and keep a record of them for when the campaign finishes next May.

The 2020-21 campaign saw all three of the relegated Premier League sides finish in the top six, with two of them gaining promotion, so will you be backing Fulham, Sheffield United and West Brom to return to the top flight?

Can managerial changes at last season's beaten play-off sides Bournemouth, Barnsley and Swansea City propel them towards the Premier League?

Or will Wayne Rooney's Derby County put their off-field issues to one side to spring a surprise?

As Sunderland enter their fourth season in the third tier, could this be their year as the Black Cats look to climb back up the leagues?

Could the likes of newly promoted Bolton Wanderers, Darren Moore's Sheffield Wednesday or a much-changed Ipswich Town go all the way?

Can Derek Adams make it back-to-back League Two promotions with Bradford City? Do you fancy Salford City or Joey Barton's Bristol Rovers to go well? And could Sutton United and Hartlepool United upset the odds after coming up from the National League?