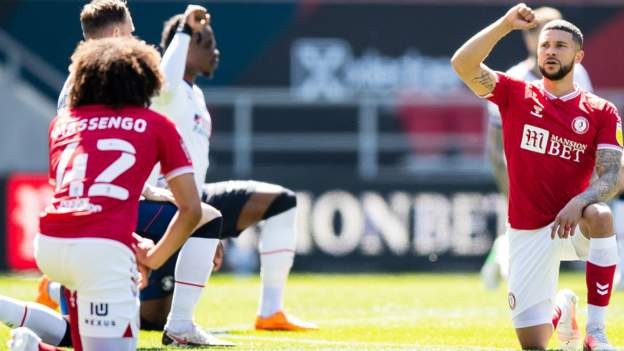 The EFL has said it supports players who wish to take a knee before games this season.

The new season starts on Friday when Bournemouth host West Brom in the Championship.

Players and staff across the divisions have been taking the knee prior to kick-off in games since June 2020 in order to show their support for the movement for racial equality.

The EFL said the impact of the gesture had been "unquestionable".

This weekend will be the first time since players started taking a knee that full crowds will be permitted to be in attendance because of the coronavirus pandemic.

In December 2020, when some clubs were allowed limited crowds for a brief period, a number of Millwall, Colchester United and Cambridge United fans booed when players took the knee.

In response, Colchester chairman Robbie Cowling said that those booing were "not welcome" at the club.

Across the 2020-21 season some players and clubs in the EFL chose not to take a knee and stood instead.

England took the knee before all of their games in Euro 2020 as Gareth Southgate's side reached the final, with Southgate saying the players were united behind doing it.

The EFL said in a statement: "Players have repeatedly said their protest is not about ideology or political affiliations and we ask that any player that wishes to express themselves in this way are respected."

It also revealed that clubs across the three divisions would be promoting a new 'Together Against Discrimination' matchday message that will "see clubs adopt a unified position on a matchday reiterating that racism, discrimination and abuse is not welcome in our game or in our communities".