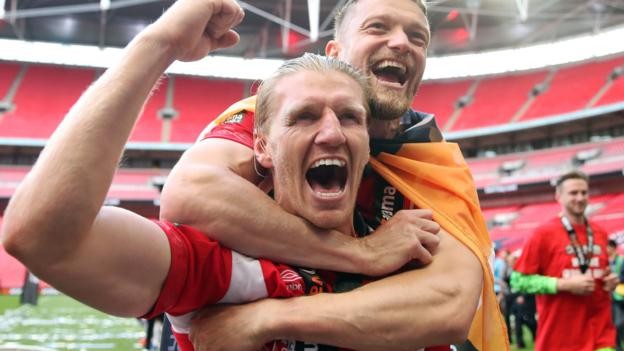 Supporters of English Football League clubs will discover their 2019-20 fixture lists at 09:00 BST on Thursday.

Championship, League One and League Two teams are scheduled to play their first games during the weekend of 3-4 August.

However, there is likely to be a televised fixture on Friday, 2 August to kick off the campaign.

Cardiff, Huddersfield and Fulham were relegated from the Premier League last season, while promoted Salford City will be in the EFL for the first time.

Cardiff's drop into the Championship sets up derby matches against Swansea for the first time since the two Welsh clubs faced each other in the top flight in 2013-14.

Ipswich will be appearing in the third tier for the first time since 1956-57 following their relegation, while Bolton will start adrift of the rest after being given a 12-point deduction as a result of going into administration in May.

The draw for the Carabao Cup first round will be made on Thursday at 19:00 BST, with all EFL clubs except Cardiff and Fulham involved.