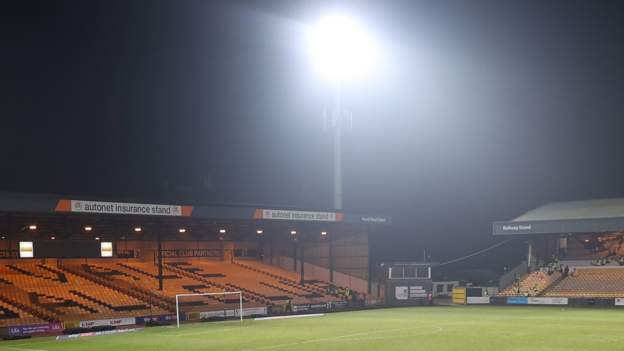 A widespread shift of kick-off times in the Football League to lower floodlight use and save money has been ruled out.

Representatives of all 72 clubs met in Walsall on Thursday.

While the rising cost of living was discussed extensively, BBC Sport has been told little appetite was expressed for moving games from their normal 15:00 Saturday slot.

Clubs would be allowed to move games if agreed but there are not expected to be many requests outside of the World Cup.

Some matches are expected to be shifted during the tournament in Qatar to avoid direct clashes with England games, for example.

League Two side Mansfield have already moved their home game against Walsall forward to a 13:00 BST kick-off on 15 October to try to mitigate the "considerable increase in energy bills".

However, it is thought the follow-on costs of potential overnight stays and opposition from supporters has made clubs wary of changing kick-off times.

Clubs were also updated on talks around Tracey Crouch's fan-led review and the appointment of an independent regulator.

Although there has been concern that new Prime Minister Liz Truss is not keen on the proposal, EFL officials have been heartened by the supportive comments of new Sports Minister Stuart Andrew and the backing it has received from the Labour Party, which has led them to believe a regulator will eventually be appointed.