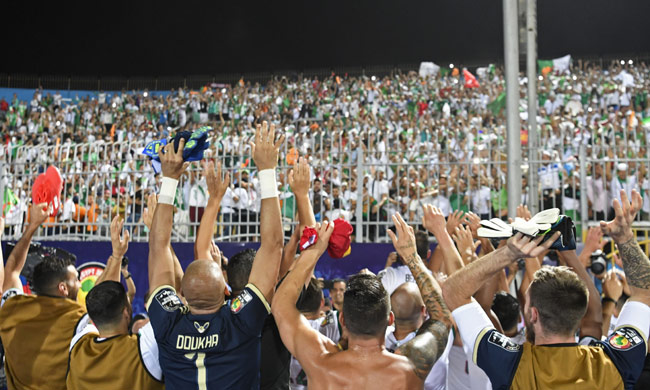 Algerian players celebrate with their fans after winning the 2019 Africa Cup of Nations (CAN) Round of 16 football match between Algeria and Guinea at the 30 June Stadium in the Egyptian capital Cairo on July 7, 2019 (Photo: AFP)

Tazkarti published on Thursday a statement to help Algerian fans attending the country's quarter-final game against Cote d'Ivoire in the Africa Cup of Nations.

The statement issued by Tazkarti, the company responsible for the ticketing process, included some rules such as every fan should have their fan ID in during the period of the African tournament whether in Cairo or any other city.

"There is a Tazkarti outlet at Cairo International Airport which will help the fellow Algerians to get the fan ID and the tickets easily," Tazkarti's statement revealed.

"To facilitate for our Algerian brothers [only], owing to the narrow time and the large number of fans arriving at the airport, the fans can attend the games with the passport and the match ticket only," the statement added.

Algeria reached the quarter-final after qualifying from the group stage with nine points after three successive victories against Kenya, Senegal and Tanzania, then the Desert Warriors defeated Guinea in the round of 16 to find themselves in front of the Elephants of Cote d'Ivoire.

The Warriors have the strongest attack, scoring nine goals, and the strongest defence in the AFCON as well, as the team has not conceded any goals.