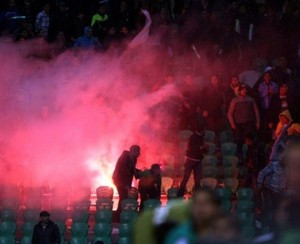 At least 73 people have been killed in clashes between rival fans following a football match in the Egyptian city of Port Said, state television reports.

At least 1,000 were hurt as fans - reportedly armed with knives - invaded the pitch after a match between top-tier clubs al-Masry and al-Ahly.

It is the biggest disaster in the country's football history, said the Egyptian deputy health minister.

Some of the dead were security officers, the Associated Press news agency quoted a morgue official as saying.

The BBC's Jon Leyne in Cairo says it appears some fans had taken knives into the stadium.

Our correspondent says the lack of the usual level of security in the stadium might have contributed to the clashes.

Police in Egypt have been keeping a much lower profile since last year's popular protests that ousted President Hosni Mubarak from power.

Egyptian fans are notoriously violent, says our correspondent, particularly supporters of al-Ahly known as the Ultras.

They have been heavily implicated in confronting the police during recent political protests, our correspondent adds. There is speculation that the security forces may have had an interest in taking on al-Ahly supporters.

Wednesday's violence broke out at the end of the match, which, unusually, Port Said side al-Masry won 3-1.

Witnesses said the atmosphere had been tense throughout the match - since an al-Ahly fan raised a banner insulting supporters of the home team.

As the match ended, their fans flooded onto the pitch attacking Ahly players and fans.

A small group of riot police tried to protect the players, but were overwhelmed.

Part of the stadium was set on fire.

Officials say most of the deaths were caused by concussions, deep cuts to the heads and suffocation from the stampede.

"This is not football. This is a war and people are dying in front of us," al-Ahly player Mohamed Abo Treika said.

Hani Seddik, who played for al-Ahly as a teenager, told the BBC: "I don't think this is about football. These trouble-makers were not football fans."

"How were they allowed to carry knives into the ground? To me, this is the actions of people who do not want the country to be stable and want to put off tourists from coming here," said Mr Seddik, who was watching the match on TV in Cairo.

Albadry Farghali, a member of parliament for Port Said, blamed security forces which "did this or allowed it to happen".

"The men of Mubarak are still ruling. The head of the regime has fallen but all his men are still in their positions," he said on television.

In Cairo, another match was halted by the referee after news of the Port Said violence. It prompted fans to set parts of the stadium on fire.

All premier-league matches have been cancelled and the newly-elected Egyptian parliament is to hold an emergency session on Thursday.

"This is a black day for football. Such a catastrophic situation is unimaginable and should not happen," he said.

Watch video of the ugly incident below: