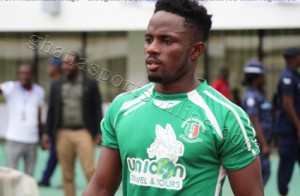 Afful is a free agent after ending his 13-year association with Hasmal.

According to footballmadeinghana, the newly-promoted side are leading the race to sign the former Ghana Under-20 striker.

The striker is also on the radar of Hearts of Oak and their rivals Asante Kotoko as well as FA Cup winners Bechem United.

The striker is currently on holidays in Nigeria and will return to his native country to complete his move to the Elmina-based side.