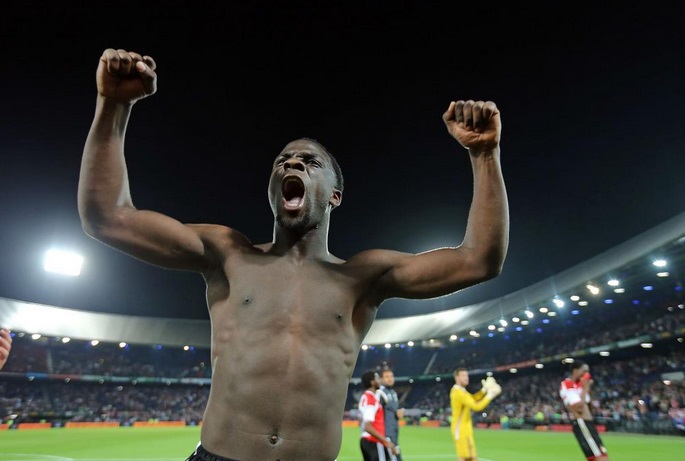 Dutch-born attacker Elvis Manu headlined Ghanaian performance in the Uefa Europa League on Thursday night as he used the last six minutes of regulation time to ensure Feyenoord sealed their passage at the death.Â

The 21-year-old has replaced Jordy Clasie with just 6 minutes of regulation time left with elimination starring at the face of Feyenoord but he netted in stoppage time to ensure the Dutch giants seal their place. 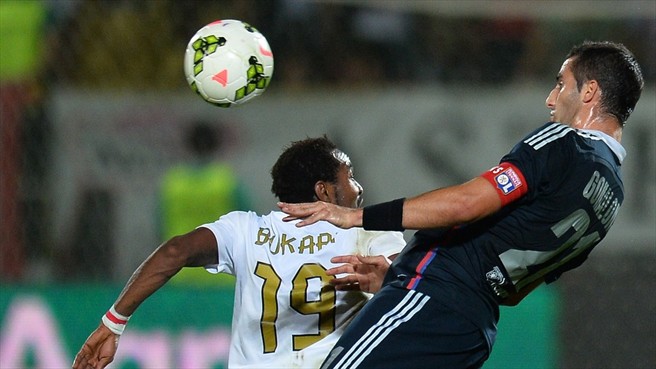 Ghana striker Sadat Bukari fights for the ball with Lyon's Maxime Gonalons during last night's game
Former Ghana U17 striker Sadat Bukari and midfielder Yahaya Seidu were both in action for Romanian side Astra when Olympique Lyon defeated them 1-0. However, the Romanians secured their place despite a 2-2 aggregate following their 2-1 win in France a fortnight ago.

Youngster Emmanuel Boateng was introduced by Portuguese side Rio Ave whose 1-0 triumph over Swedish side Elfsborg confirmed their place in the final knock out stages of the competition. While Boateng was seeing action, his Ghanaian compatriot Alhassan Wakaso warmed the Ave bench.

Former Hearts of Oak striker Samuel Afum was unused by BSC Young Boys who held Hungarian sideÂ Debrecen to a 0-0 draw and qualified on a 3-1 aggregate.

Defender Gideon Baah watched the entire action from the HJK bench when the Finnish side held Austrian sideÂ Rapid Wien to a 3-3 draw to qualify on a 5-4 aggregate win.

FC Twente failed to qualify to the next round after drawing 1-1 withÂ Qaraba?. TheÂ Azerbaijani side progress on away-goal rule. Youngster Shadrach Eghan was in action for Twente.

Spanish La Liga side Villarreal completed a 7-0 aggregate win over Kazakhstan's Astana. On Thursday when they beat them 4-0 in Spain, Ghanaian striker Patrick Twumasi played for Astana.