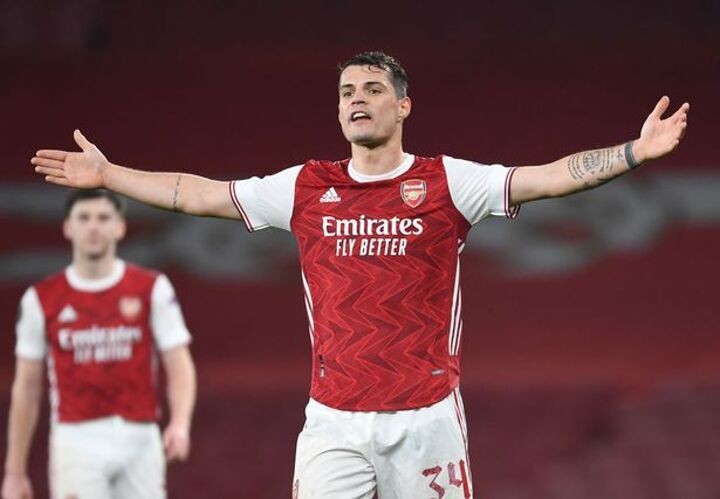 Unai Emery's infamous five leaders could be down to just one by the start of the season with Granit Xhaka set to depart.

The Switzerland international will join up with Jose Mourinho at AS Roma after they agreed a £17m move.

With two years left on his contract, Arsenal have looked to sell the midfielder to garner some sort of cash.

Mikel Arteta is keen on bolstering the squad with his own players but will need the necessary funds as a result.

As well as Xhaka, the likes of Hector Bellerin and Alexandre Lacazette could also depart while Mesut Ozil has already left the club.

Along with those hour, and Pierre-Emerick Aubameyang, the five were infamously named as Emery's leaders.

The Spaniard gave the floor to the players when picking a new captain after Laurent Koscielny departed.

Aubameyang has been named as the new skipper but the other four have all worn the armband too.

However, Arteta has been keen to implement his own style on the squad but that has meant bringing in his own players.

It also means that he has been slowly booting Emery's dressing room allies out as he looks to improve his own standing.

Xhaka's impending departure to AS Roma will be the latest example of Arteta's Arsenal purge.

Bellerin is another who has been strongly linked with a move away from the Emirates in the summer with Paris Saint-Germain interested.

While Atletico Madrid are interested Lacazette as they look to strengthen their attacking options.

Ozil was one of the first to depart under Arteta's watch when Arsenal released him in January to allow him to sign for Fenerbahce.

It came after months of being ostracised by the Spaniard and falling out behind the scenes.

That means by the start of the new season, Arsenal could be left with just Aubameyang from Emery's original five leaders.

The Gabon international remains the top striker at the north London club despite a tough year in front of goal after signing a mega-contract at the beginning of the year.

However, more departures are planned following the release of David Luiz - whose contract is set to expire this month.

His Brazilian pal Willian could also leave, though it remains to be seen whether Arsenal would demand a fee for the winger who joined from Chelsea last summer.

Eddie Nketiah is set to be offered a new contract but his future is still under speculation as Arteta prepares to sell the forward.