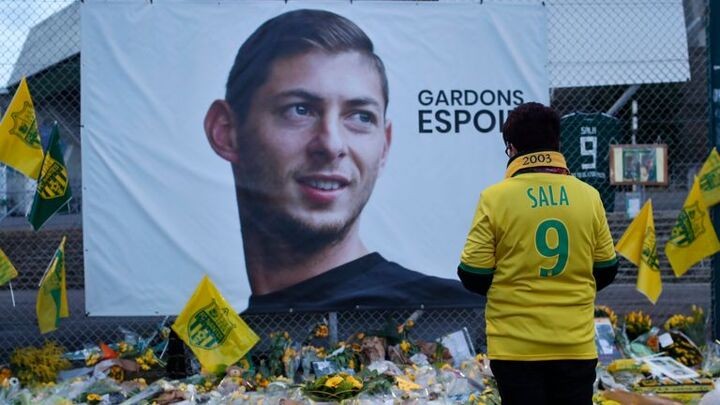 Two years since the death of footballer Emiliano Sala, his family are still awaiting answers about how he died.

Sala was set to move to Cardiff City as part of a multi-million-pound record transfer deal in January 2019 and was en route to the Welsh capital from Nantes, his former club in France, when he died.

The plane he was travelling in came down in the English Channel, and news of the 28-year-old's death sent shockwaves around the football world.

Cardiff had been monitoring Sala for some time, hoping he could enhance the club's chances of keeping their place in the Premier League during that season.

He was Nantes' star striker, having scored 42 goals in 120 games for the Ligue 1 side during his four years there. The French club retired their No 9 shirt in his honour.

"Every year, on this date, it is always a deep emotion for us. Emiliano is still in our memories," Nantes told Sky Sports News in a statement.

Sala's family's solicitor has called for an inquest start date to be finalised in order to "establish the full truth" regarding what happened on January 21, 2019.

Why did the Piper Malibu plane come down?

It found that neither the pilot nor plane had the required licence to operate commercial flights. Shortly before the crash, Sala had sent WhatsApp messages to friends saying he thought the Piper Malibu aircraft was going to fall apart.

The report found that the pilot, David Ibbotson, whose body has never been found, lost control during a manually-flown turn, which was more likely to have happened because the flight was "not conducted in accordance with safety standards applicable to commercial operation".

A post mortem on Sala's body found he had been exposed to harmful levels of carbon monoxide. If Ibbotson too had come into contact with the toxic gas, which is highly likely, it would have impacted his ability to control the plane.

How was Sala's body recovered?

A search and rescue operation continued for a few days after the plane went down, before being called off.

After that, a fundraising effort enabled Sala's family to gather enough money to employ a specialist to locate the wreckage. It was found almost immediately.

Sala's body was brought to shore, but his family were highly critical that the authorities decided not to recover the plane, which may have held vital evidence. Over time it has slowly perished due to fishing trawlers in the area.

Has anybody been charged with what happened that night?

David Henderson, the man who allegedly arranged the flight pleaded not guilty to endangering the safety of an aircraft in October last year.

Cardiff Crown Court heard how the pilot, David Ibbotson, was contracted to fly the aircraft, but he did not have a commercial pilot's licence at the time.

It had expired two months before the incident. Henderson's trial date has been set for October 18, 2021.

Why has there not been an inquest into his death?

The full inquest was scheduled to start last year, but coronavirus has caused delays and it has now been postponed until the culmination of the criminal proceedings against David Henderson.

In February 2019 an initial inquest hearing into Sala's death at Bournemouth Coroners Court heard that a post mortem determined he died of head and trunk injuries.

However, the full cause of Emiliano's death can only be determined at a full inquest.

What have his family had to say?

The family want answers. In the days that followed Sala's death, his mother and sister visited Cardiff City Football Club, where hundreds of flowers and scarves had been laid out, in tribute of the young footballer.

Cardiff fans may have never seen Sala play, but there was an outpouring of grief.

A year on from his death, Sala's family called for answers and again this year, they are still searching. Their solicitor, David Machover, has issued a statement.

He said: "It is a tragedy that two years have passed since Emiliano's death and we still do not know exactly how and why he died. An inquest is the only way to establish the full truth.

"I very much hope that the Dorset Coroner will now set a date for the inquest to start immediately after David Henderson's trial so that Emiliano's family do not have to endure another bleak anniversary with no answers."

Has any money exchanged hands for his £15m transfer fee?

In short, no. For a long time, there was a bitter debate between Nantes and Cardiff over who should foot the bill for the multi-million-pound transfer fee.

In September 2019 it was announced by FIFA that Cardiff had been ordered to pay the first instalment, which was just under £5.2m.

However, that never happened because they appealed to the Court of Arbitration for Sport. Cardiff have had twelve lawyers working on the case.

They have just put forward a second submission. Nantes will have their opportunity to respond and if no deal can be reached between the two clubs there will be a full hearing by CAS in the Autumn.

Has Cardiff offered any support to Sala's family?

For some time the club have been working on offering financial support.

They hope the Emiliano Sala Memorial Trust will be launched in the coming weeks, with trustees nominated by the family.

Cardiff say they plan to spearhead an international campaign for donations from the football community and beyond.