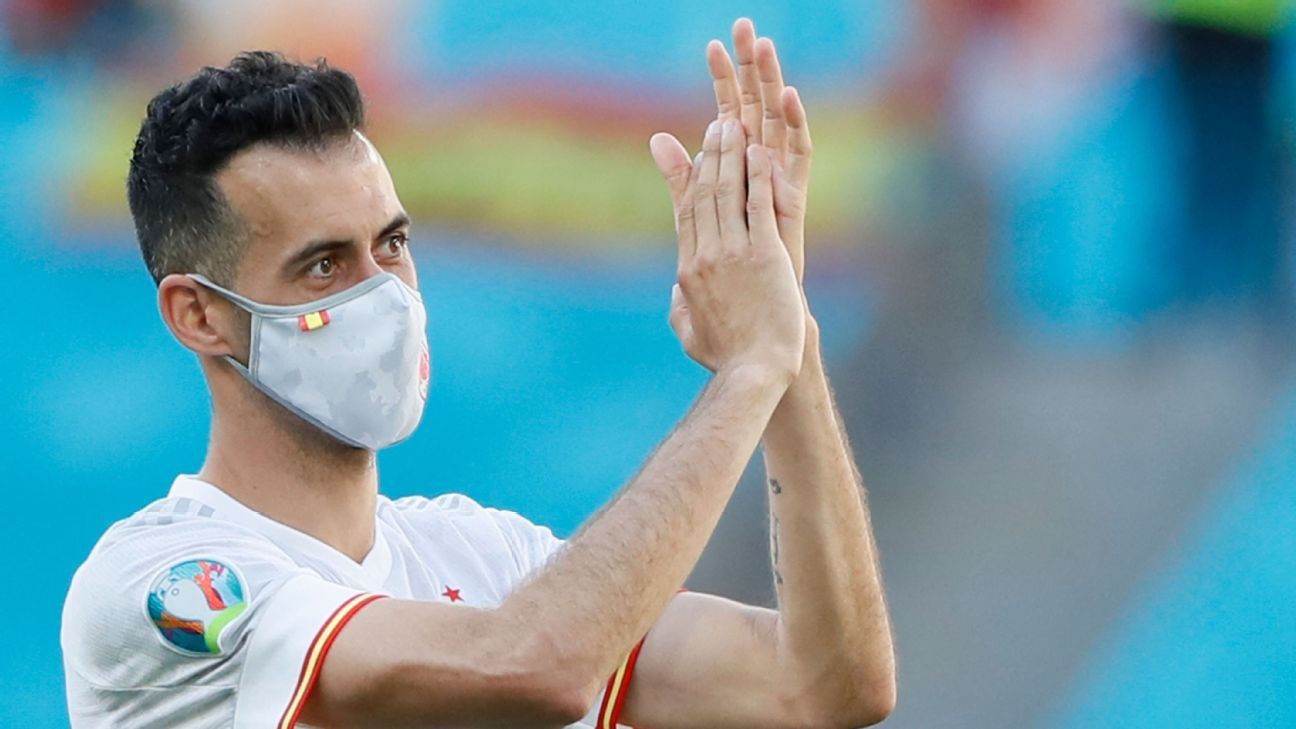 An emotional Sergio Busquets has admitted that he doubted whether he would be able to feature in Euro 2020 before putting in a man-of-the-match performance in Spain's 5-0 win over Slovakia that saw them qualify for the last 16.

Busquets tested positive for COVID-19 on June 6 and had to remain isolated at home for two weeks before rejoining the squad on Friday.

The Barcelona midfielder played 71 minutes of Spain's final group game on Wednesday, captaining the side to their first win of the tournament.

"I'm emotional. I had a bad time, a lot of days at home," he said, struggling to hold back tears as he spoke to Telecinco after the match. "I didn't know if I could come back or not. But the group is strong... All this has made us grow."

"It wasn't easy because you're waiting for a negative PCR test," he added in a postmatch news conference. "I've had teammates who've had one after 20-plus days. I wanted to play in this Euros, it will be the last one for me, for sure."

An own goal from Slovakia goalkeeper Martin Dubravka opened the scoring in Seville before Aymeric Laporte, Pablo Sarabia, Ferran Torres and another own goal from midfielder Juraj Kucka saw Spain record the joint-largest margin of victory by any team at a European Championship.

Spain will now face Croatia in the round of 16 in Copenhagen on Monday after finishing second in group E.

"It was the game we wanted," Busquets said. "It's a boost for everyone. We're happy, we couldn't be first because it didn't depend on us, but for sure this will strengthen us for what's next."

Coach Luis Enrique had come under pressure after Spain began the tournament with two draws, a 0-0 with Sweden and a 1-1 with Poland, receiving some whistles from the home crowd at Seville's La Cartuja stadium before Wednesday's spectacular turnaround.

"How could I not be happy. The fans enjoyed themselves, the players and their families can be happy too, all of the staff," Luis Enrique said. "We haven't given up. I said in the build-up that the cava was about to be uncorked, and here it is. [The criticism] hasn't hurt me. It's part of the profession."

The match saw Adama Traore make his tournament debut, and the winger subsequently admitted he had to adapt to an unfamiliar full-back role when Chelsea's Cesar Azpilicueta went off injured.

"I'd never played at right-back," Traore admitted. "The boss said there was a little problem with Azpilicueta, I said 'wherever the team needs me.' It was my first time, but to help the team, anything. I'd even put the gloves on [to play in goal] and see what happens!"