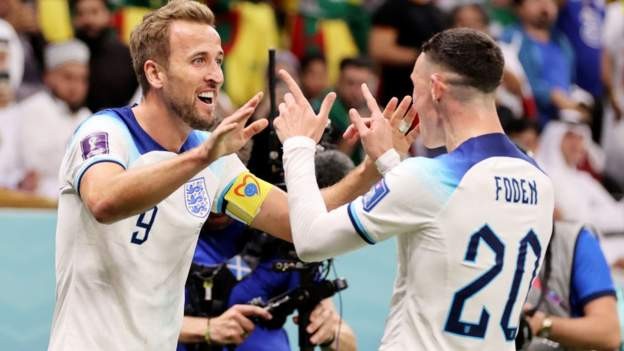 England will meet France in the World Cup quarter-finals on Saturday after an impressive demolition of Senegal at Al Bayt Stadium.

Gareth Southgate's side survived a nervy opening in which goalkeeper Jordan Pickford made an outstanding save from Boulaye Dia to run out convincing winners with a powerful display of attacking strength.

Jude Bellingham was England's star man, setting up the first goal for Jordan Henderson with a perfect cross after 38 minutes then having a hand in the second on the stroke of half-time, combining with Phil Foden as captain Harry Kane powered home his first of the tournament.

It left Kane just one behind Wayne Rooney's all-time record of 53 England goals and he now has the perfect stage here in Qatar to write a fresh page in the history books.

Foden was the creator once more as England wrapped the game up in the 57th minute, crossing for Bukayo Saka to show great awareness and touch to flick a delicate finish past Senegal goalkeeper Edouard Mendy.

It capped the perfect night for manager Southgate, who opted to restore Saka and keep faith with Foden, leaving out Marcus Rashford despite his two goals in the win over Wales. Raheem Sterling was not considered as he dealt with a family matter.

England took a while to move through the gears against Senegal but when they clicked they showed a level of creation that gives them real edge and makes them genuine contenders for this World Cup.

The early worries came when Senegal attempted to expose Harry Maguire's lack of pace, which they did twice and will be noted by France and Kylian Mbappe, but once Bellingham exerted his authority over the midfield England were able to take control and cruise to victory.

Borussia Dortmund's 19-year-old has already had an outstanding World Cup but he now has power and production on the biggest stage to add to his reputation.

Bellingham is the identikit modern midfield player and the manner in which he combined with Foden for England's second goal, completed by a rousing finish from Kane, was a glimpse into a golden future.

Foden has also grown into this World Cup, having scored against Wales and creating two goals here. England's midfield and attack is taking shape with perfect timing for what will be the sternest of tests against France and the peerless Mbappe.

Henderson and Declan Rice allow Bellingham to flourish while Saka once again showed his maturity and threat from the wide positions along with Foden.

Kane is the mobile spearhead up front and it is a good sign for England that he is now on the goal trail and chasing Rooney's record. He occasionally needs to play his way into major tournaments, as at Euro 2020, and Southgate will have been delighted to see how emphatically he finished the chance he got for the second goal.

Pickford has had little to do in this World Cup but when called into action he made a vital intervention against Senegal that paved the way for England to get their act together and win with ease.

England were struggling in defence in the opening phase, with Dia missing one big chance before he was presented with another that needed Pickford to make a strong one-handed stop from his angled shot.

Senegal were soon behind and England had the momentum which they never threatened to relinquish, Southgate's side closing out the win with plenty to spare following an uneventful second half.

Pickford's place in the England side has occasionally been questioned from outside but never by Southgate, who has total faith in a player who has never let him down.

Bamba Dieng (Senegal) wins a free kick in the attacking half.

Attempt missed. Marcus Rashford (England) right footed shot from the right side of the six yard box is close, but misses to the right. Assisted by Luke Shaw with a cross.

Attempt missed. Pape Sarr (Senegal) right footed shot from outside the box is high and wide to the right. Assisted by Famara Diédhiou.

Youssouf Sabaly (Senegal) wins a free kick in the defensive half.

Pape Gueye (Senegal) wins a free kick in the defensive half.

Attempt missed. Ismaïla Sarr (Senegal) header from the centre of the box is too high. Assisted by Ismail Jakobs with a cross.

Ismaïla Sarr (Senegal) wins a free kick in the defensive half.