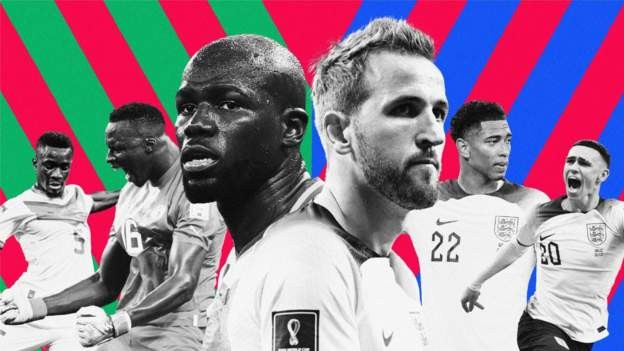 Gareth Southgate says England's tag as "favourites" means nothing as they prepare for their World Cup last-16 meeting with Senegal.

The Three Lions meet African champions Senegal in their first knockout stage match in Qatar on Sunday at 19:00 GMT.

England qualified as Group B winners with a 3-0 win over Wales on Tuesday, while Senegal were runners-up behind the Netherlands in Group A.

"We will be considered favourites," Southgate said.

"But that doesn't really mean anything in a one-off game," the England boss added.

"It doesn't mean there isn't any pressure for Senegal because every international team has great pressure in their own nation and externally as well."

The meeting at Al Bayt Stadium is the first between the two nations and the winner will meet reigning champions France or Poland in the quarter-finals.

England ready to go the distance

While Senegal have reached the knockout stage of a World Cup for just the second time, England are bidding to make the last eight in consecutive tournaments for the first time since 2006, following their run to the semi-finals four years ago.

Southgate's side were eliminated by an extra-time Croatia winner in Russia, before then losing out to Italy on penalties in the Euro 2020 final at Wembley last summer.

"We are two tournaments on from when we played Colombia at this stage in Moscow. I think our level of experience is better, our level of ambition is different," Southgate told BBC Radio 5 Live.

"When we qualified from our group stage in Russia, we were probably celebrating quite a bit. This time was a great evening for our fans and we enjoyed the win, but we were already thinking of the next game.

"We know the focus has to be on this one game, nothing else."

Asked about the prospect of penalties, Southgate added: "We are aiming to win the game and avoid extra time and penalties, but if we need to go 120 minutes or beyond that we have to be ready for that mentally and physically and I believe we are."

'We have huge respect for Senegal'

Senegal lifted the Africa Cup of Nations trophy for the first time in February as Aliou Cisse's side overcame Egypt in a penalty shootout.

The Teranga Lions were dealt a huge blow prior to the World Cup when star player Sadio Mane was ruled out of the tournament with a knee injury he suffered playing for Bayern Munich less than two weeks before his nation's opening match.

But victories over hosts Qatar and Ecuador, after an opening defeat by the Netherlands, ensured they have qualified for the knockout stage for the first time in 20 years.

"We have been very impressed with Senegal," Southgate said.

"They are African champions and are very proud and have great spirit and belief in their team. They have some excellent individual players who can cause problems, but a good structure as well.

"Cisse has done a fantastic job. We know the size of the job ahead of us."

Senegal coach Cisse was unable to attend his news conference on Saturday because of illness, raising doubts over whether he will be on the touchline.

'Important Maguire has felt the love'

Southgate has so far seen his faith in Harry Maguire repaid by the Manchester United centre-back, despite his recent struggles at club level.

Partnering Manchester City defender John Stones at the heart of a back four, England kept successive clean sheets against the USA and Wales following a 6-2 thrashing of Iran.

Southgate believes the 29-year-old Maguire, who has started one league game for his club since August, has benefited from England's style of play - as well as the appreciation shown by the fans.

"He knows we've got complete belief in him," Southgate said. "He's had huge performances for England in two tournaments where we've had a huge degree of progress as a country.

"As with most players of that quality, it is about confidence. You can see that when he plays in our team. We play in a way that suits him.

"He feels the love of the fans, that was clear in the stadium the other night, and that was brilliant to see because that hasn't always been the case in the last few months with England.

"He's helped to form a really important bedrock for our team."

England captain Harry Kane won the golden boot at the 2018 World Cup, and although he is yet to score in Qatar - despite England's tournament-high nine group-stage goals - he has contributed three assists.

The Tottenham striker had an injury scare earlier in the tournament after sustaining a knock against Iran but says he is now focused on hitting his peak.

"First and foremost my foot feels fine, no problem at all. It has been getting getter and better day by day," Kane confirmed on Saturday.

"Form-wise I feel like I have been playing well. Goals are what I'm going to be judged on most, but I'm a calm individual and I always try to focus on doing my best for the team.

"I will continue to do that. If the goals come, great, it will give us a better chance of winning. It will be a tough game, but tomorrow hopefully I can get off the mark.

"I feel really good, I feel fit and sharp. I feel as match fit as I'm ever going to feel. Only time will tell. I can try and come into the best form with these knockout games."