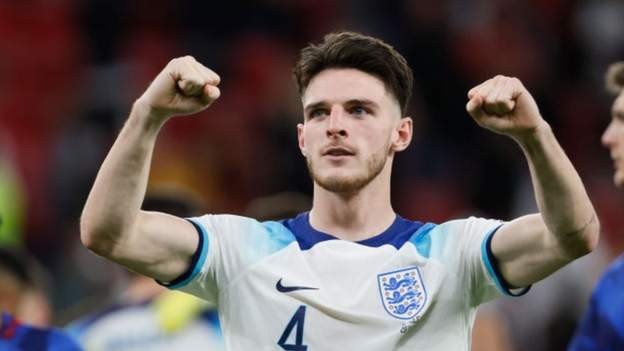 England's quality means they should be feared by other nations at the World Cup, says midfielder Declan Rice.

The Three Lions are through to the last 16 in Qatar and face Senegal on Sunday for a place in the quarter-finals.

"Other nations will look at our quality - and why should we not be feared?" said the West Ham United captain.

"If you look at our attacking talent, we have world-class talent. Across the board we have players who have won the biggest trophies.

"It is up to us to prove that. The likes of France have done that. We're not just here to get into the last 16, we want to go the whole way."

'England's problems right now are only good ones'Who would you pick for England's tie with Senegal?

England's players have the experience of reaching the 2018 World Cup semi-finals in Russia and the final of the European Championship last year.

But he says there is nothing but positive support within the squad for whoever gets the nod.

"What is so good about our group here is we are all so supportive of each other," the 23-year-old added.

"There is probably a selection headache for the manager but whoever he picks, I know everyone will be rooting for each other. It is a real team effort now.

"I think (the competition) is top level - it's always nice to know you can bring players on that can instantly change the game.

"We've got world-class players that can do that. In a World Cup you need that.

"Competition is really healthy and I'd do anything to win the World Cup. So if that means someone comes on and helps, that's all that matters. We all share the same goal."

England went into the World Cup on the back of a six-match winless run and relegation from the Nations League.

However they topped Group B following wins against Iran and Wales and a goalless draw with the United States.

Rice, who is at his first World Cup, says confidence is high within the camp as England prepare for the high stakes of the knockout stage.

"Our mentality now is fantastic, we have players that have won trophies year in, year out - so they've brought that mentality and installed it to England," he said.

"It's about the manager too, the way he talks to us, he's so calm. He emphasises we're England, we're just as big as anyone else and we can achieve anything. When you have a manager like that, anything is possible.

"The closest I've got to a big shock was beating Germany and I remember thinking that day in the dressing room, there was no way we were losing.

"You want that feeling, because that's what takes you all the way."