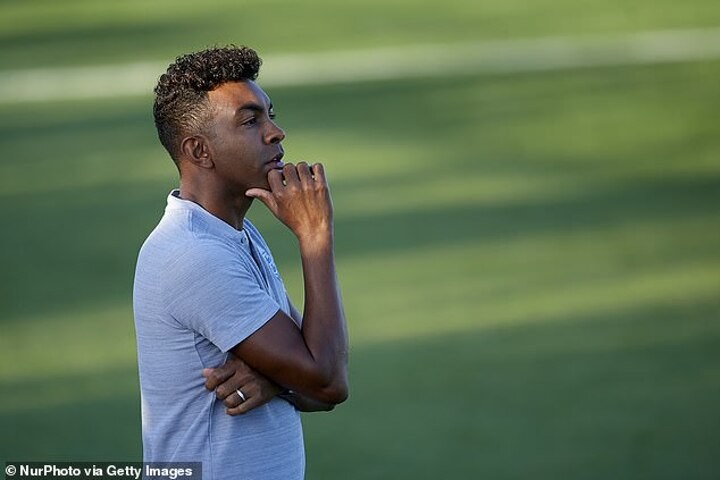 Detail is everything at St George's Park and research compiled on how to best connect with England's next generation threw up an eye-catching statistic.

One hundred per cent of those coming through the system started their journeys in grassroots football. Every single one of them, no exceptions.

In the North that is Saturday mornings, muddy pitches, volunteer parents. A few quid for subs fees.

In the South, particularly London, some of the most promising talents are products of cage football culture — attempting to better an older sibling or bigger kids from the year above.

Grassroots takes many different forms and several of those coaching within the FA's development phase — teams under the seniors — are following similar paths to those they mentor.

'I started with Farnborough Town's community scheme when I was 14,' Betsy tells Sportsmail. 'I was fortunate enough to get a role in the afterschool clubs, holiday camps.

'You're tying shoelaces, fostering a love for the game. It's so rewarding. There is nothing better than making people smile.'

Betsy was a tricky winger, who Fulham manager Kevin Keegan plucked from non-League Woking for £150,000 in 1998. He featured once in the Premier League and enjoyed a strong career lower down the pyramid, taking in 12 clubs.

Before all that though, when back at Farnborough, his eyes had already turned to coaching.

Betsy was uncertain whether his slight body would ever allow him to flourish in a professional game dependent on physicality.

Instead of going to university, he took up the assistant football in the community officer role with Farnborough, which seemed his calling until playing took off.

It was always on his mind and, at 27, plans were made for his future. Bristol City and Barnsley both allowed Betsy to coach academy teams while he was contracted with them.

It has been a long road to this moment, shaping England's youngsters. Betsy, 42, talks passionately about 'respecting the trade, learning the craft'.

He has coached men and women in America and lived in Africa. It is a mystery how he fitted a professional career in, really.

The FA appointed him four years ago, with his work at Fulham — helping mould the likes of the Sessegnon twins, Josh Maja, Eberechi Eze, Omar Richards, Harvey Elliott and Patrick Roberts — seen as what was required at international level.

Betsy started with the U15s and has coached each age group through to 18. England's U21 manager, Aidy Boothroyd, often draws comparisons between social work and coaching at this level.

'No one person has done the job of developing a player,' says Betsy. 'It's a teacher, a parent, a coach, a mentor.

'And the player has to want to work. I've been fortunate to work with some outstanding youngsters. Some of them have come from the park.

'I look back at when I was at the community scheme. You have to connect with the parents. The parents are giving you their child. They want them to be safe.

'There will be learning moments, challenges but you've got to pitch that at the right moments.

'It's the same thing for the national team. A player's first inception in an international squad is at 15 and that is a huge responsibility for us.

'We don't want the shirt to be heavy and ex-players have told us that it is. We have to create the right environment: make them feel safe in a place where they can bond.

'The England team needs togetherness as a group. That is exactly the same thing as I was doing at 16-17 (at Farnborough). It's just on a bigger scale.'

Part of the reasoning behind Dan Ashworth and Matt Crocker (both former FA technical staff) turning their backs on the Victory Shield — a round-robin with the home nations — was to stop 15-year-olds being labelled 'the next Rooney' live on Sky.

Highlights of the younger age groups are almost impossible to find on YouTube. Jamal Musiala scored a sensational goal in victory over Brazil at the Montaigu Tournament but there is barely a trace of it. The hope is they can flourish relatively undetected.

Musiala is one of four England prospects born in 2003 that were sat down aged 13 to be told they were being fast-tracked.

Jude Bellingham, Amadou Diallo and Karamoko Dembele were the others. All four joined the Under 15s, with Bellingham and Musiala already Champions League regulars and the former a full international.

'Are we comfortable just letting them play and not worrying about the scoreline?' Betsy asks.

'We've got so many case studies of it working well. There has to be support, because there are bad times, times when you don't perform how you'd hope.

'That is OK. Don't worry. You're coming next camp anyway. I'm probably more patient with late developers because I was that player. I'm fully aware that I have that bias.'

Betsy also has a bias towards those who have helped him personally. Geoff Noonan — now an FA coach developer, who took a chance on him at Farnborough — is one, and there are plenty of others.

Keegan is perhaps the most pertinent in mirroring the basic elements of coaching, individual time with a player, and elite sport.

'I had that repetition of practice from a world-class player, a humble man spending his time with a kid from Woking.

'With England, it's important we have players from Category 3 clubs — from Exeter, AFC Wimbledon, Burton Albion or wherever.

'They are fantastic professional clubs and help us. There is no snobbery on how we select players.

'It might take one day, three days or three months but we're still striving to make sure the player has a proper experience.'