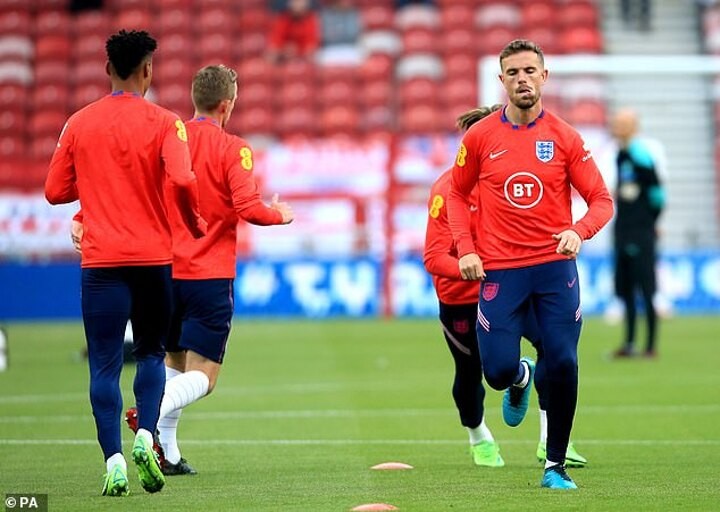 Gabriel Agbonlahor has hit out at the decision to include Jordan Henderson in the England squad amid his injury troubles, labelling the Liverpool star as 'selfish' for not pulling out.

Henderson, alongside Harry Maguire and now Trent Alexander-Arnold, is a huge doubt for the start of the Euros having not featured since February after sustaining a groin injury against Everton at Anfield.

Henderson was an unused substitute as England overcame Austria 1-0 in a friendly at the Riverside Stadium on Wednesday night and is in a massive battle to be fit for the Three Lions' opener at the Euros against Croatia on June 13 at Wembley.

And ahead of England's curtain-raiser in 10 days time, Agbonlahor has admitted he has been wound up by Henderson's involvement in the travelling Euros squad.

'The thing that is really winding me up is the Henderson thing,' Agbonlahor - who played three times for England - told talkSPORT.

'Even for Henderson, he should just be honest with the manager now and say 'you know what I am struggling here. I'm a leader and a captain in myself, I'll do the right thing for the squad. Bring in Ben White, Eric Dier, bring in whoever you have to bring in as another centre midfielder, because this injury is playing up now, I'm not fit and it might reoccur if I do get better for the second game'.'

Henderson was involved in England's squad for the friendly against Austria in the hope he would play some part but Gareth Southgate later revealed his experienced midfielder did not feel fit enough to feature.

'He wasn't happy this morning with how he felt,' Southgate admitted after the full-time whistle on Wednesday. 'We scanned him and that was all clear. The decision was taken not to involve him tonight and let's see how he progresses from there.

And when specifically asked if Henderson is being 'selfish' by co-presenter Jamie O'Hara regarding his inclusion, the former Aston Villa man was emphatic in his response.

Agbonlahor replied: 'I think he is being selfish. If you look at it, the squad has been announced and he told Southgate this morning that he is not fit today.

'They said the scans have come back and they're fine, and he knows himself that there is a niggle he is feeling.

There was some notable omissions from the England squad as Henderson was kept in, including the likes of Jesse Lingard and James Ward-Prowse.

And Agbonlahor added: 'He can't go. If I am an English midfielder that hasn't been picked in this squad, I'm fuming. I am thinking, 'hang on a second, this player is an amazing player, great career so far, but he is injured. Send him home.'

'It's not as if it's Lionel Messi, like send him home. We have got other midfielders that can do just as good a job as him.'

Furthermore, Manchester United centre back Maguire remains a doubt having sustained an ankle injury late on in the season at Aston Villa.

And Alexander-Arnold, who was a late inclusion in England's Euros squad, is now sweating over his fitness after limping off against Austria with a thigh injury.