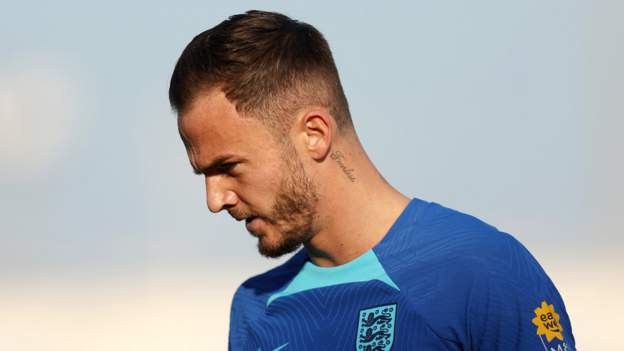 England midfielder James Maddison joined the World Cup squad for training in Qatar for the first time on Saturday.

Playmaker Maddison, 26, was one of 14 players to take part in the session as he continues his recovery from a knee injury he suffered during Leicester's win at West Ham on 12 November.

England's starting side against the USA on Friday completed recovery work.

Kieran Trippier, who played in the 0-0 draw, called the result a "good point".

"We kept a clean sheet," said the defender. "It is a good point for us in the group and we just move on now, focus on the next game.

"All we can do now is recover, review the game where we could have done better and get ready for the next battle."

'England turn clock back to dismal summer but are on track'Maddison never gave up on England returnWhat do England and Wales need to do to qualify for last 16?

England will qualify for the knockout stage if they avoid a 4-0 defeat against Wales in Group B on Tuesday.

"The motivation is there - England against Wales is a massive game," said Newcastle's Trippier.

"Every single team in our group are in the top 20. So you can't underestimate any team - you have to give respect and we certainly do to Iran, USA and Wales."