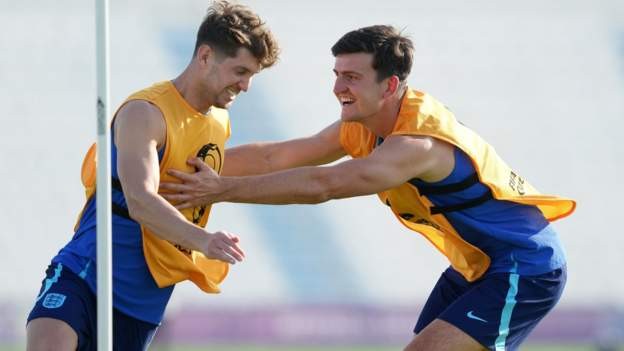 John Stones has praised England centre-back partner Harry Maguire's character after a strong start to the World Cup despite his club troubles.

Maguire has started one league game for Manchester United since August, but played in all three England group games - and is likely to start again in Sunday's last-16 tie against Senegal.

"Right from the first game, the best response is what he's been doing," Manchester City's Stones said.

"All three games have been terrific."

England's only problems right now are good ones - ShearerEngland should be feared, says RiceWhat England team would you pick to face Senegal?Who is through in World Cup and who could join them?

Stones and Maguire have played 32 times together for England, including in runs to the 2018 World Cup semi-finals and the final of Euro 2020.

"It's about us finding that partnership again, whoever we play with, and I think we have done in these three games," the 28-year-old added. "Now it's time to keep building, keep improving.

"[Having] been through so many moments with him - knowing what he's been going through at his club as well, and the person that he is - I think it speaks volumes about him to come through that and still believe in himself like I believe in him, like all the team believe in him, [like] his team-mates at United believe in him.

"There's been a lot of noise from the outside which he has not listened to and [instead] tried to improve himself.

"He's come into this tournament and hit the ground running, and that is great credit to him."

Stones says England do not want to fall foul of not living up to expectations after Belgium and Germany's shock World Cup exits.

Four-time winners Germany and Belgium's so-called 'golden generations' were both eliminated at the group stage on Thursday.

"It's always difficult when you see big teams or big players that don't live up to the expectation of the nation," Stones said.

"We don't ever want to fall into that category. All we can affect is what we're doing, what games we're playing and giving it our all."