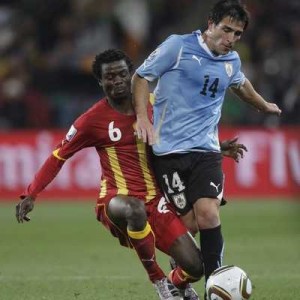 Ghana midfielder Anthony Annan is still interesting a number of top Premier League clubs on the back of his eye-catching displays at the World Cup finals despite him playing in the new season in Norway.

The midfielderâ€™s agent has confirmed that the 24-year-old Ghanaian would be very interested in a move to England.

Annan has been linked with a host of top clubs in Europe, most notably Manchester United, Chelsea, Arsenal and French Ligue 1 side Lyon, and although his agent has received no concrete offers thus far, Lars Petter Fosdahl suggested a move to England was a distinct possibility.

The 23-year-old midfielder is currently at Norwegian club Rosenborg, having moved there in 2008 after a failed trial at Blackburn Rovers under then manager Paul Ince.

The playerâ€™s agent suggested Annanâ€™s form at the World Cup had reignited interest in his tough-tackling client.

Annanâ€™s agent Lars Petter Fosdahl said: â€œIt is the close season at the moment. There are no enquiries that we consider to be concrete or serious. He had a good World Cup and top clubs have taken notice of him, so we are assessing the situation.

â€œWe are hoping for a move to a top English club and that is what Anthony (Annan) wants. But I donâ€™t want to comment on any specific club at this time. His performance in the World Cup was an eye opener for many people. â€œ Lars Petter Fosdahl continued.

â€œHe has always been regarded as the best defensive midfielder in the Tippeligaen, but obviously the Premier League is different. However I think he showed in the World Cup that despite not being the biggest boy he has one of the biggest hearts.

â€œHe is not intimidated by a good fight, he tops the rankings for tackles and passes completed, plus he is very professional and energetic on and off the pitch.

The agent was then asked if Arsenal boss Arsene Wenger had previously had the opportunity to sign the Ghanaian midfielder:

He concluded: â€œThat would be before I entered into a professional relationship with Anthony (Annan).â€

Annan is thought to favour a move to Old Trafford, having previously professed to being a boyhood Manchester United fan, however Arsenal, Chelsea, and French Ligue 1 club Lyon have also been mentioned as potential suitors.