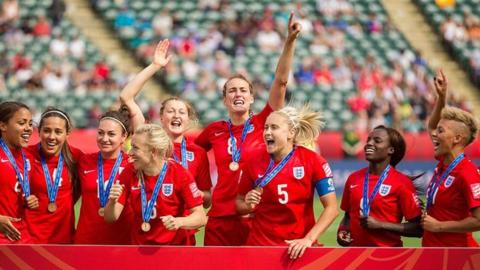 England's women won a bronze medal at the 2015 World Cup

The English Football Association plans to put together a British women's team for the Tokyo Olympics in 2020.

FA chief executive Martin Glenn is "confident" Team GB will be competing for a medal in three years' time.

Great Britain did not field a team in Rio last summer because the four home nation football associations could not come to an agreement.

But Glenn says the other three home nations will not stand in the way this time.

"We were very disappointed that for the Brazil Olympics we couldn't put in a British Olympic team because, for women's football, Olympic tournaments are disproportionately important compared to men's football," he told BBC Sport.

"It's just a chance for another international tournament, the men's game has plenty.

"We've worked really hard with the other home nations to get them behind the idea that a British team would be good for football both in England but also in Scotland, Wales and Northern Ireland.

Team GB entered men's and women's sides at London 2012, organised by the English FA. Stuart Pearce took charge of the men and Hope Powell coached the women. Both teams were knocked out in the quarter-finals.

Team GB or no Team GB: the football debate

England's FA had put forward the idea of sending Great Britain teams to the 2016 Olympics, but Fifa said it would need the agreement of all the ruling bodies.

Stewart Regan, the Scottish FA's chief executive, was among those to voice concerns that a Great Britain team could impact the home nations at future international tournaments such as World Cups.

In April, chief executive of the Football Association of Wales, Jonathan Ford, said he could now see the "merits" of a GB women's football team.

England's women, led by Mark Sampson, won a bronze medal at the 2015 World Cup and earlier this month reached the semi-finals of Euro 2017.

Glenn says the strength in depth through the nations could be key to further success.

"We would want to pick from the best of British talent and there's a number from nations outside of England and we know that would be good for the game."