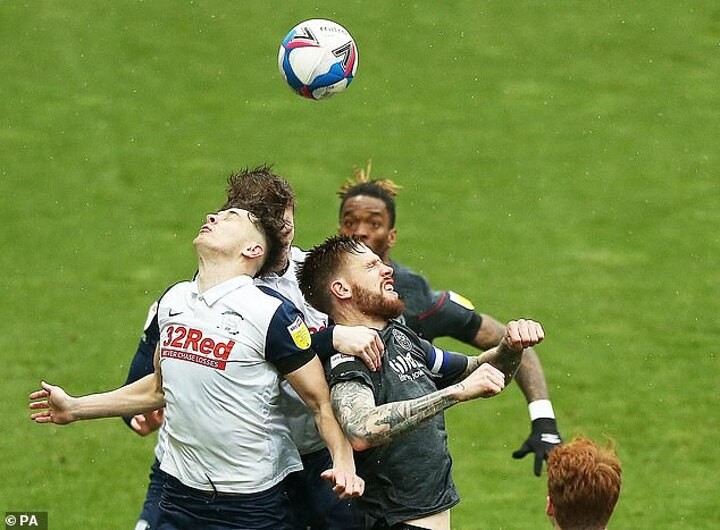 English football chiefs are in talks over expanding their studies into the risk of head trauma in football beyond heading, in order to gain a fuller understanding of the risks to players' health.

The authorities have announced landmark restrictions on heading in adult training amid concerns over player safety and long-term neurodegenerative problems.

Further research will take place during the 2021-2022 season ahead of a formal review next June.

Sports and Wellbeing Analytics' PROTECHT mouthguard measured the impact of nearly 1,000 headers among youth and women teams at Liverpool and Manchester City.

But soon their research could include tackles and other collisions during matches and training.

'It's all the forces that go through your head on an accumulated basis… that can come from a number of different places,' CEO Chris Turner said.

'Headers are just one component… an important one but not the only one.'

He added: 'That's what we're talking to the Premier League and FA about – building out into something broader… we're obviously very hopeful that will happen and they'll do that with a broad church of clubs – both male and female. That's really important.'

Premiership rugby clubs have already used the mouthguard data to adapt training and protect their players.

By expanding studies to include first-team players and match collisions, football can paint a fuller picture – and better understand the importance of factors such as neck strength, already established as 'a key difference' between men's and women's rugby.

'It's vital – you need to look at every level of the game,' Turner said.

'What happened in the Euros when French defender (Benjamin Pavard) was suddenly poleaxed and then went off and came straight back on again, those are the kinds of things that – in addition to looking at headers – you want to take note of. You can provide a lot of insight and information about what's going on if you can capture that.