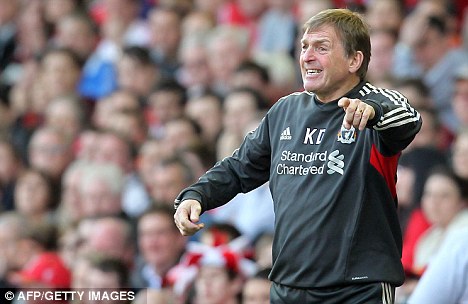 Liverpool have offered trials to three rising stars from Ghana after they caught the attention of the scouts of the English giants.

Bright Gyenfi, a 16-year-old defender and 18-year-old midfielders James Akaminko and Nurudeen Amed are on the books of Prampram Mighty Royals.

A number of Premier League sides have been monitoring the trioÂ  but, according to Sky Sports, the teenagers are set to arrive at Anfield in April.

Dalglish is looking to the future with his attempts to tap into the African talent pool but he has more immediate concerns following the weekend home defeat to Wigan.

It was a fifth loss in six Premier League games and although Dalglish still has belief in his squad, he thinks he may have to change his approach.

'I think we've got good players,' the Scot told the Liverpool Echo.

'It's a good squad and I have always said we have got that. You don't get to an FA Cup semi- final and win the Carling Cup if you aren't.

'But we've got a problem winning games in the league. Maybe there is a lot we have to educate ourselves about and maybe not have to play the lovely football we try and play. Maybe we need to change our philosophies a wee bit.'