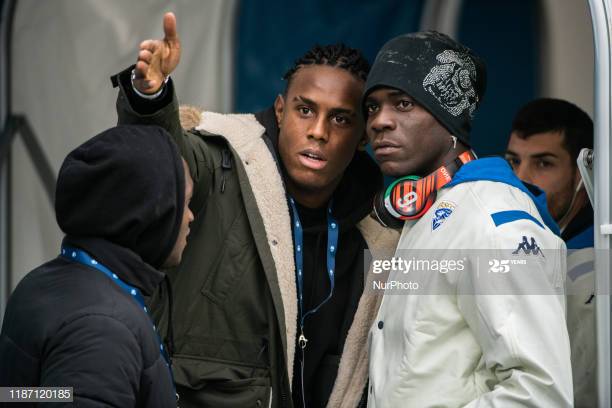 Mario Balotelli (R) in Ferrara, Italy, on 8 December 2019, before the Serie A soccer match between Spal and Brescia, met his brother Enoch Barwuah Balotelli (C). (Photo by Giacomo Cosua/NurPhoto via Getty Images)

Younger brother of Mario Balotelli, Enock Barwuah has expressed disappointment in his brother for playing at only 30 percent of his potential.

The maverick poacher joined Brescia to much fanfare at the beginning of the 2019/20 campaign, returning to the town where he spent his childhood.

It was hoped the return to his hometown would help Balotelli rediscover his confidence, but that hasn’t been the case.

However, he has found the net just five times from 20 matches in Serie A this campaign.

Barwuah is frustrated to see his brother who he thinks has so much talent continue to let himself down.

“The one thing I would like to tell Mario is that if he played at 100 per cent, he’d be unstoppable. Instead, he only plays at 30 per cent. He’s very sensitive, so if the slightest thing goes wrong, he lets his head drop and doesn’t perform. It’s not easy to play with that much pressure on your shoulders,” Enock told Calciomercato.com.

“We were both so happy when he signed for Brescia. Mario didn’t think twice, he accepted immediately and dropped all the other proposals. Unfortunately, everything he says or does gets painted in a negative light. That’s why he wrote ‘Why always me?’ on his shirt.

“I get so angry when I see Mario being the victim of racist abuse, I’d like to be by his side on the pitch to support him. I think harsher penalties are needed against these fans, but you can’t force someone to change their minds.”

Balotelli was born in Palermo to parents from Ghana, but was raised by an Italian family, taking on their name Balotelli, even if the adoption was never made official.