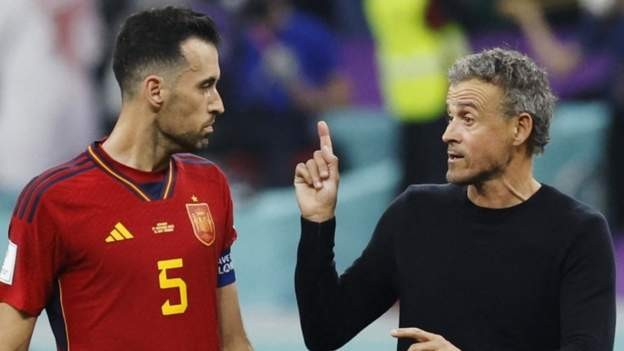 Spain coach Luis Enrique says he will not take any risks as they face Japan in their last World Cup group game.

Although the 2010 winners only need a point to qualify for the last 16, all four nations in Group E have a chance to go through on Thursday.

Seven outfield players in Spain's 26-man squad are yet to feature in Qatar but Enrique will not give them game time just for the sake of it.

"Some may end up not playing at all - we all know how it works," he said.

"It is a reality, we have spoken about it with the players.

"Don't write Costa Rica off, they can win against Germany. Any of the four nations can still go through and that is very telling.

"We are here to win seven matches. We want to be winners of this group."

Japan came back to upset Germany in their first game but then lost 1-0 to Costa Rica, leaving they and Costa Rica a point behind group leaders Spain as Japan aim to reach the last 16 for the second straight World Cup.

"I would like the players to play well so they can increase their value in the eyes of the Japanese people and I hope we can impart hope when they look at our games and our play," said coach Hajime Moriyasu.

Who is through in World Cup and who could join them?Fifa World Cup: Groups & scheduleWorld Cup TV coverage guide

Japan defenders Takehiro Tomiyasu and Hiroki Sakai are both doubtful with hamstring injuries.

Midfielder Wataru Endo could miss out after missing training due to a knee problem.

Spain midfielder Gavi, 18, is doubtful after missing training due to a minor injury.

Captain Sergio Busquets is one booking away from a suspension and is set to be rested.

I suspect Japan's chance of progressing may have disappeared with their defeat by Costa Rica. Even a draw here might not be enough to send them through, and I certainly don't see them beating Spain.

I don't see there being many goals, but Spain have played the best football in the tournament and been the most eye-catching side, and they should be too strong.

Spain's style will suit Japan, who like it when teams take the game to them, and they might get chances on the break, but it is going to be hard for them to get anything from this game. This has been a brilliant group from the start, but I don't see any late twists.

Sutton's full predictions for the final round of World Cup games