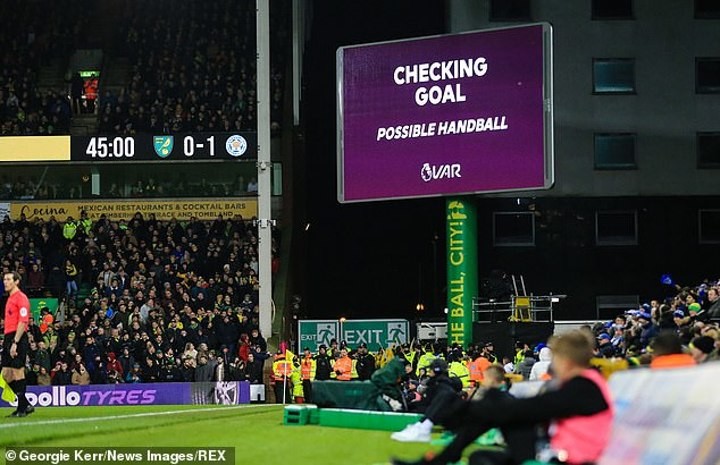 The Premier League is happy with VAR is working in its inaugural season in England and insists they are ahead counterparts in Italy, Spain and the MLS with the way it is being used.

The English top flight introduced the use of Video Assistant Referee at the start of the season but several controversial incidents and decisions have sparked frustration from fans, pundits, players and managers over how the technology is currently being implemented.

VAR was introduced in Italy's Serie A at the start of the 2016-17 season, America's MLS in 2017 and Spain's La Liga in 2018-19, but those in charge of the league in England insist they are 'massively ahead' of where other leagues were when they first introduced it, according to a source at the league.

A Premier League source told The Sun: 'There are going to be errors and mistakes along the way in that first trial area and that's what we're getting.

'If you look at where we are compared to Italy, Spain and the MLS and where they were in their first season, we are massively ahead of them. Our referees have made less errors or perceived errors than over there. We are well ahead of the game.

The complaints many have had with the use of the technology relate to its inconsistent use from game-to-game, the lack of willingness for the referee at Stockley Park to overturn decisions, increased focus on minimal offside decisions and the lack of clarity for fans inside the stadium when a check is taking place or decision has been made.

Despite this, it seems those running the league said the use of VAR has been effective in significantly reducing the amount of refereeing mistakes in games and the referees using the technology are desperate to see it succeed.

'Definitely, it is working. All the referees, they buy into it, they see it day-in, day-out and know exactly what it does and doesn't do.

'It won't be perfect. They never said there would be 100 per cent accuracy - it would just decrease the number of errors which is what it has done, it has proven that.

'Everybody wants it to work but people slamming it is doing it no good at all. Rather than slamming it, let's try and move it forward.'

The source also acknowledged that there are areas where its use can be improved, including allowing fans to hear the conversation between the on-pitch referee and the assistant in Stockley Park to solve confusion around checks and decisions.

One high-profile VAR incident came in Liverpool's win over Manchester City when referee Michael Oliver failed to spot a Trent Alexander-Arnold handball in the box prior to Fabinho opening the scoring for the Reds at the other end, a goal many thought should have been overturned but VAR decided to allow it.