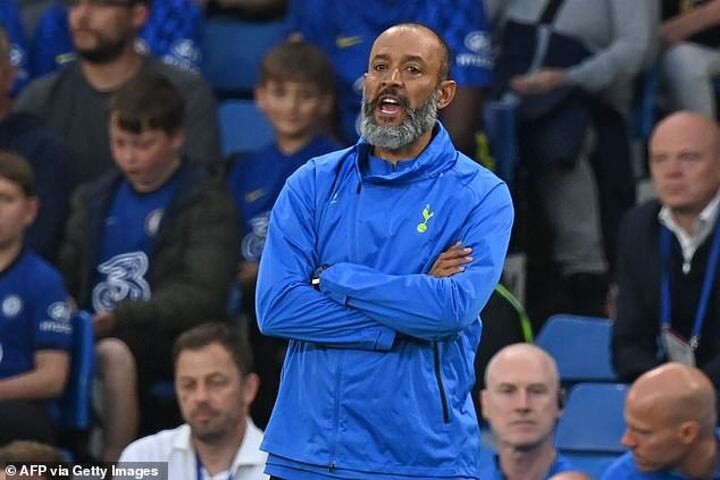 Nuno Espirito Santo revealed he is yet to speak to Harry Kane, despite the Tottenham striker's future overshadowing the team's pre-season preparations.

Spurs played out an entertaining 2-2 draw with Chelsea at Stamford Bridge on Wednesday night but the hot topic remains the club captain's absence as he tries to push through a move to Manchester City.

When asked about Kane's future, Espirito Santo said: 'It is not that I don’t want to comment. I believe we should discuss internally among us the issue relating to Harry and try to avoid any kind of public argument or discussion about it.

'Us, we have to focus on what is important. We have to solve the situation but first between us.

'We solve the situation internally with the club. Speaking and trying to reach a better solution and conclusion to this situation.

'All pre-season for all clubs has been hard in terms of preparation, I know this is a different aspect. I know it is different circumstances but it has been very hard for everybody.'

When asked directly if he has spoken to Kane, he admitted: 'The answer I will give you is I expect to speak with Harry soon and I haven’t had the chance yet.

'Anything in relation to Harry is internal so first of all we have to first of all solve the problems ourselves and then I will speak with you.'

Chelsea are hunting a deal for Romelu Lukaku while Kane is the external focus for Spurs fans but despite the limelight on absent strikers, an entertaining game played out on Wednesday night.

A Hakim Ziyech brace gave the Blues a comfortable lead before Spurs pulled one back through Lucas Moura and then levelled with Steven Bergwijn's strike.

It was a brief glimpse of what life post-Kane could look like, though it remains to be seen whether the England striker will leave this summer.

He was due to return to pre-season training on Monday but has continued his summer holiday with an extra day in Florida.

The 28-year-old still plans to return to Spurs this weekend, but he is likely to need a Covid test at their Enfield base and complete a period of isolation before he can return to training.

He could 'test to release' on day five of his quarantine but even then is likely to be short of fitness for next Sunday's opener against City, the team he is pushing to sign for.

Pep Guardiola's side's offer of £100million was rejected by Spurs, and there is uncertainty over whether the champions can strike a compromise with Daniel Levy.

The Spurs chairman has put a £150m price tag on last season’s top scorer, and the Kane saga is expected to drag on unless Spurs alter their demands.