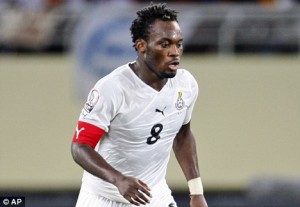 Chelsea ace Michael Essien is not sure about his return date to international football.

After recapturing his form this season, Essien was reported to stage a return in March next year for the 2012 Africa Cup of Nations qualifier at Congo and an international friendly possibly against England.

Essien asked for a temporary break from the Ghana national team after recovering from a knee injury which sidelined him for this year's World Cup finals in South Africa.

"I have not said anything but I am still going to come back. Once I am fit and confident I will always come back," Essien told Kickoffghana.com

Essien was in Ghana on Tuesday where he commissioned two projects- a water bore hole and public toilet and launched a reading initiative project for children in his hometown, Awutu Breya.