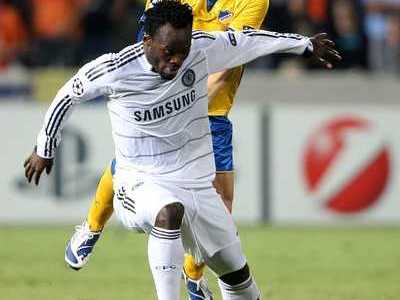 Chelsea midfielder Michael Essien says he is shocked by the huge score-lines in the English Premier League in recent matches.Â Â

The Ghana international is recovering after rupturing his anterior cruciate ligament and meniscus in pre-season ahead of the current campaign.

The midfielder desperately watched as his club when handed a 5-3 beating by Arsenal last week while the Gunners themselves suffered a similar fate when they thrashed 8-2 by Manchester United earlier in the season.

Essien is confident Chelsea will bounce back but he is surprised by huge score-lines in the English top-flight so far this season.

"Every player crosses the white line and always wants to give his all so to come away with such a big loss is always hard to take," he wrote on his blog for the official site.

"You almost want to play another game as soon as possible to get it out of your system and I can assure all Chelsea fans that we will be back to winning ways in the league soon."

"I have been in the Premier League over six years and I canâ€™t remember seeing such heavy defeats suffered by the top clubs in the league.

"It is unheard of to have one of these clubs suffer such a big defeat throughout the season, let alone all of us suffering these defeats within the first 10 games."

Essien has been out of action for six months and he is expected to return next year.