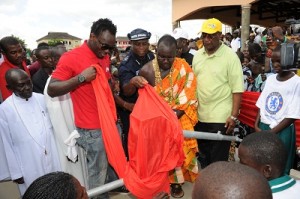 Essien opened a water bore hole in the centre of the town and new public toilets funded by his foundation.

More than 20,000 people attended the programme dubbed 'A Day With Michael Essien'.

'It is so good to be home and be able to give something back to my community,' said Essien.

'It is great to be here, where I used to play football, and the amount of people here is really special, it makes me really proud,' added Chelsea's number 5.

The first football match included Essien's region Awutu, the local team, coached by none other than Stanley Quaye, the same man who developed Essien's skills when he was 12.

The Inter Milan midfielder Sulley Muntari said: 'I came along to offer my support to Michael because what he is doing with his foundation is brilliant.

'He is a great blessing and a great brother; I have known him for seven years now and the relationship is very strong. I just love him, that's the thing.

'He gets a great reception in Ghana, it is always important to feel welcomed by your own people, and he is doing some great stuff. He is giving back to the community and he has a very good heart, I am very pleased to know him and very happy to be here,' he added.

Essien launched the Reading Goals initiative, which is in collaboration with the player and Right To Play.

Reading Goals is a series of books created with help from the publishing company Pearson Education and the Ghanaian Ministry of Education to inspire children in the country to read.

They are based on Essien's own experiences and he handed copies to youngsters in front of a mass of people before the football final took place.