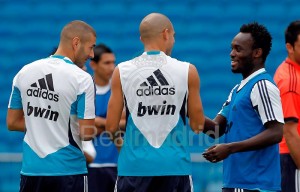 Michael Essien has been named in Real Madrid's squad to face Granada on Sunday less than 24 hours after joining the Spanish side from Chelsea.Â

This comes after he completed his first training session with the team on Saturday evening.

The Ghana international joined up with his new teammates moments after being presented to the fans as a new signing at the Santiago Bernabeu.

The 29-year-old signed a season's-long loan contract earlier in the evening after passing a routine club medical at the Sanitas La Morajela Hospital.

He was received well by his new teammates at the training grounds which started off with stretches presided over by Rui Faria.

The session then heated up with short races and sprints before Jose Mourinho came in with his game plan for Sunday's game against Granada.

He then called out the 20-man team for the game to be played at the Bernabeu with new signing Michael Essien inclusive.