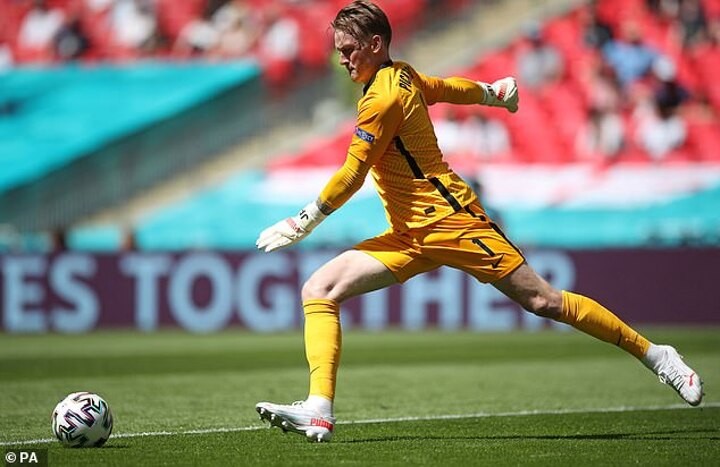 It's the big one on Friday night as England face Scotland in both their second Group D encounters at Wembley.

England come into the match on a high after beating Croatia 1-0 in their opening match, while Scotland's mood contrasts significantly following their 2-0 defeat by Czech Republic on Monday.

Ahead of the spectacle, Sportsmail columnist CHRIS SUTTON rates the two likely line-ups.

Straightforward opener against Croatia, although John Stones wasn't too happy when Pickford was launching long balls instead of playing out from the back.

Got his work cut out against Andy Robertson and Kieran Tierney. Consistent as ever as England made it a winning start to Euro 2020.

No Harry Maguire, no problem. Stones led from the back superbly against Croatia and that can only stand him in good stead.

Answered his array of critics last time out, and bound to get the nod over Conor Coady and Ben White again.

England can lack balance when using a right-footer at left back, and I'm still not sure it's the right way to go.

Positively commanding performance in midfield - the type which said 'drop me at your peril' to Gareth Southgate. I'd be starting him against Scotland.

He does what he does so effectively, and it can go unnoticed. England's midfield wouldn't be the same without Rice in it.

Easy to see why he's one of the first names on Southgate's team sheet. Maximum effort is a given from the Chelsea man.

You heard the Wembley roar when Foden was on the ball. This England prospect is always worth getting excited about.

He's probably annoyed that he endured a low-key opening to Euro 2020. Kane will want to get himself that goal now.

Those who criticised Southgate for starting Sterling against Croatia were made to eat their words. He got the winner, and proved a point.

Criticised for his positioning for Patrik Schick's wonder-strike but usually a safe pair of hands. Penalty-save hero to get Scotland to these Euros.

Great season for Norwich as he helped them finish top of the Championship. Didn't do much wrong against the Czechs.

Leader at the back for Leeds. Scotland need him to bring those same leadership qualities into the their backline now.

Badly missed against the Czechs. Scotland were a totally different team without his presence down that left. Big boost to have him back in.

Confident, athletic and a great prospect. This teenager hasn't played too many times as a wing-back in his career but he won't be fazed.

A big game-player for Scotland in recent times and the Scots need his tenacity and presence in midfield now more than ever.

Disappointing against the Czechs. Needs to protect the three centre backs while also getting on the ball to make Scotland tick.

Great drive and determination but needs to win the battle in that midfield area. Used to facing Premier League quality with Southampton at least.

Along with Tierney, probably the only two players who would stand a chance of getting into the England squad. Normally doesn't disappoint for his country.

Bullied by the Czechs after starting as a lone striker ahead of Che Adams. Scotland need him holding the ball up to get them up field.

Should have started the last game. Scotland's best all-round striker who will stretch England's back line and can link up well with Dykes.