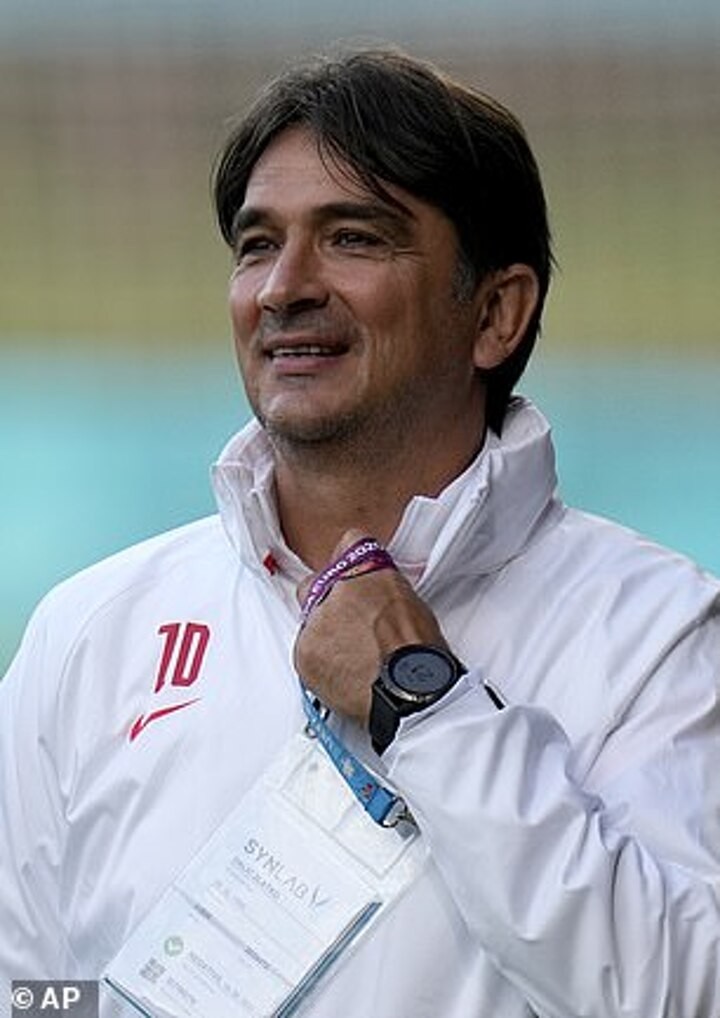 Dalic is confident, however, that every Croatian player will blank out those concerns to pursue a last-16 place at Scotland's expense.

While Gilmour has entered 10 days of isolation ahead of the winner-takes-all Group D fixture, no close contacts have been established within the remainder of Steve Clarke's squad.

Dalic feels wider Covid regulations have already given Croatia a raw deal at the tournament and is on high alert in case of any further complications.

'There is a pressure for all of us, lasting for a month relating to this situation,' said the 54-year-old, assessing playing the tournament within a pandemic.

'Every third day, we go through the tests. There is psychological pressure and uncertainty. So we are afraid something would happen, they test positive and we all end up isolating and having those serious issues. I hope nobody else is positive. I don't want this to expand. Hopefully, it's just a single case.

'We are concerned but we have to do this match. We have to play and try to win the three points.

'We have just arrived in Glasgow, had lunch and we are due to have a meeting. But I don't expect anyone to say they don't want to play.

'All of them are afraid but, nonetheless, we have to play, concentrate on the game and forget everything else. That's how the situation is for this entire Euros. All of us have been negative until now.

'We are taking all the precautions and implementing all the measures. But we just have to see what happens.'

The Scottish Government were bemused when Croatia cited concerns over the strictness of close-contact regulations as a reason for abandoning a planned training camp in St Andrews.

Dalic's squad have instead trained at Rovinj in their homeland and flown to the UK for each of their three group matches.

A 1-0 defeat by England and a 1-1 draw with the Czech Republic means Croatia have to beat Scotland to progress. And Dalic is upset that quarantine rules will see very few of their fans inside Hampden.

'We always knew the third match would be decisive,' he said. 'This is our last chance and we're going to try to take it.

'I keep saying it — we are at a disadvantage. We are harmed because we don't have our fans here. We are much better with our supporters behind us. It's not fair.

'We have to travel, we are in isolation all the time — and they have told us if one of us is positive then we all go into isolation.

'We're afraid of all these things and being told we are not allowed to do this and that.

'Nonetheless, I wish Gilmour a good recovery and that nobody else ends up positive with Covid because that would make things difficult.'

Dalic doesn't expect Scotland to be critically weakened by the Chelsea youngster's absence.

'Any player missing is something that is not good for the team,' he added. 'He didn't start in the initial line-up but played the last match.

'Scotland have other players, maybe more experienced players, that will replace him. So I don't think it's a great blow to Scotland because they are a good team with great players.

'They have shown they are in good form. They drew with Holland 2-2 and only lost a goal in the last minutes.

'Against England, they played well away from home in front of the English fans. They have a lot of motivation, a lot of self-confidence.

'Against the Czech Republic, they created some very good chances and didn't deserve to lose.This will be a very difficult game. Scotland are a strong team, they can be physical and they have a lot of power.

'Even so, we want to achieve success and will be fighting very hard to do it. We will have to be patient and take our chances.'

Rangers left-back Borna Barisic is judged not fit enough to start at Hampden, having missed Croatia's two previous games with a back issue.

'Borna has trained only twice recently, so that hasn't been sufficient for me to be sure he can play an entire match,' said Dalic. 'He will be with us and will be there, though.'

Winger Ivan Perisic, meanwhile, is confident Croatia will deliver under pressure and reach the knockout stage.

'We haven't been the real ones in our first two matches,' said Perisic, who scored against the Czech Republic.

'We have to improve and be way better. It's not going to be easy but, in the past, whenever we've had to, we were the real team, the real ones, and we should not fear anything.'