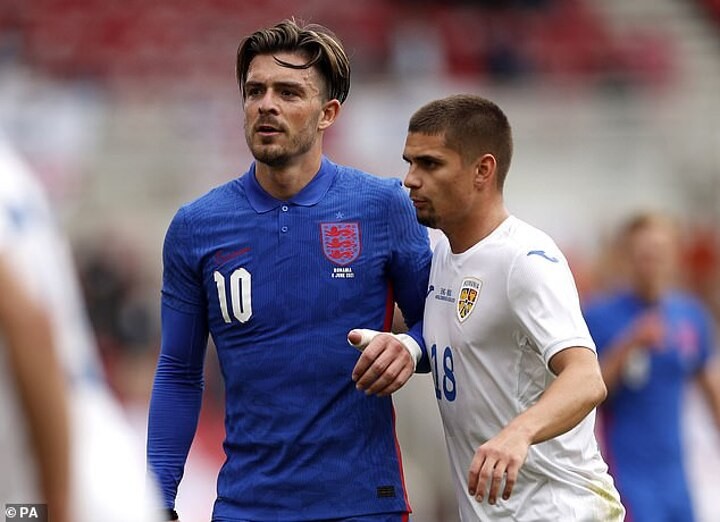 No doubt Jack Grealish meant well, but there may have been a little sigh of exasperation when Gareth Southgate heard him talking about 'crunching' his club-mate John McGinn at Wembley on Friday.

Grealish isn't the best at crunching. Most times, he is the one who gets crunched. That's good, in its way. England are blessed with forward talent and that challenges the impetuous defender into conceding fouls.

The last thing Southgate needs is his bright young forwards being drawn into some random, physical battle against a team that, man for man, they should beat hands down.

Yet Grealish's words did help in some way. They serve as a warning of the potential pitfalls when England play Scotland.

England need to play a game of football. A game of football against a team that, until this competition was expanded to 24, for all their individual qualities would not have been here.

Scotland were the country who instigated the growth from 16 nations at the European Championship. They did so, frankly, because they weren't getting in.

Their appearances at the finals in 1992 and 1996 were anomalies. For the six editions before that and the five after, they did not qualify.

Even this campaign comes courtesy of play-offs and penalty shootouts, after Scotland finished nine points adrift of automatic qualification in Group I - losing as many games as they won and beating only Cyprus, San Marino and Kazakhstan.

According to the FIFA rankings, Scotland are more than pulling their weight just by being here. They are the 25th ranked nation in Europe and of those present only Finland and North Macedonia sit lower.

Southgate isn't about to make the mistake of saying that, but his measured tones on the eve of the match suggested he knew the perils of losing focus.

'We know we've got to compete or we'll get overrun,' he said. 'Yet our attention this week has been solving the tactical problems that Scotland present.

'My generation grew up with England-Scotland and the Home International Championships. It was one of the only matches that was on television every year, always a huge occasion. Probably the younger players have a different take on those rivalries and I haven't felt the need to build it up or emphasise that side of it.'

Southgate was, of course, on the pitch the last time these teams faced each other in the finals of a major competition.

The Euro 96 meeting has been the media's touchstone in the build-up, most specifically the Paul Gascoigne goal that settled it. Left foot lob over Colin Hendry, right foot finish on the volley. No crunch involved there.

Gascoigne did not need to crunch Hendry, or anyone in the Scotland team. He was just the better player. That is the point Grealish, and maybe others, are missing.

If called upon - and Southgate is believed to be starting the same XI that beat Croatia, bar the full backs - Grealish is not required to crunch McGinn or his team-mates.

Run at him, run past him, do what you do to players in the Premier League every week. Just don't engage in the fervour, the passion of the occasion or any of the distractions, of which there will be many.

It helps, as Southgate says, that this is a young England team who do not carry the baggage of previous generations. They will know, of course they will know, about the rivalry. They have team-mates at clubs, coaches, family members, friends who will tell them this is a game like no other.

The most famously invigorated, on England's side? Alan Ball. 'It's pretty common knowledge that Alf Ramsey did not like the Scots,' Malcolm Macdonald told Ball's biographer. 'But his dislike was nothing compared to Bally's hatred.'

Martin Chivers recalled arriving at Hampden Park with the team bus rocking from side to side 'because Bally was signalling to all the Scotland supporters what he thought of them - we used to scream at him to sit down.'

In 1972, Ball took this antagonism to a new level. In the first half he hacked down Billy Bremner with his first tackle and later scored and celebrated wildly.

In the second, he sat on the ball to wind the clock down while flicking V-signs at the locals, before taking it into the corner and wiping his nose on the Scottish flag fluttering from the pole.

'We'll never get out of here alive,' Chivers remembers thinking. Yet when Ball died, the Glasgow Herald remembered him with affection.

'He should have been one of us,' read the obituary. 'Red-haired, crabbit, never beaten and able to pass off either foot, Ball seemed to be separated from his football twin, Bremner, at birth.'

There is no equivalent in today's ranks. Of this England squad just Kyle Walker, Marcus Rashford, Harry Kane and Raheem Sterling have played a competitive match at Hampden, while Luke Shaw started a 2014 friendly and John Stones, Kieran Trippier and Jordan Henderson have soaked in the animosity while on the bench.

It is memories of those encounters, the away games, that ignite the spark. The booing of the national anthem, the raw hostility inside the stadium.

The majority of Southgate's squad have little to draw on bar received information. Why would Declan Rice, with his heritage, feel as Ball did about Scotland? What has David Moyes ever done to him?

'We've got huge respect for Scotland,' insisted Kane. 'They're an experienced side with great players like Robertson. Look at his record. Champions League winner, Premier League winner. We won't take anything for granted.'

So now to the football.

The dilemma for Southgate was whether to recall Harry Maguire, who says he is fit having not played since May 9. Southgate has resisted it and will stick with Tyrone Mings, who was excellent on Sunday.

He's right, why gamble? If England do the job, there will be an opportunity to introduce Maguire in the final game against Czech Republic, which may even be close to a dead rubber.

If England are comfortable, maybe Maguire can play some smaller part late on. Rotating the full backs also makes sense. It is an exhausting position and here is a chance to introduce fresh legs.

Reece James and, most likely, Shaw will have the task of pushing some of Scotland's most dangerous players - Robertson and Kieran Tierney - back upfield.