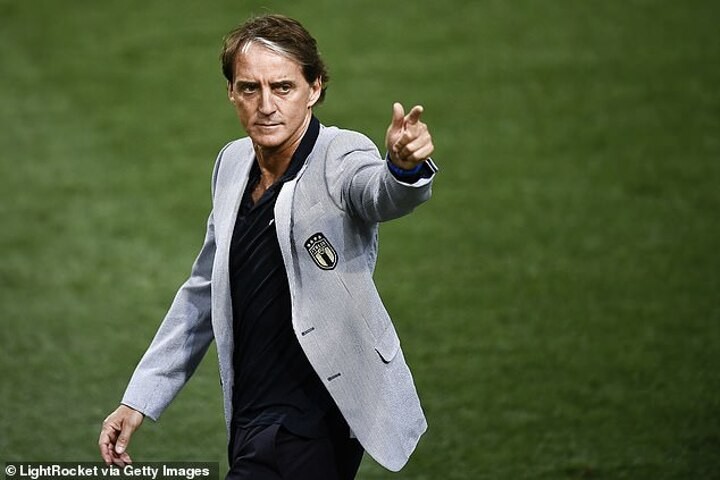 It feels unnatural to describe Italy - winners of four World Cups and one European Championship - as dark horses for Euro 2020, but that's exactly what they are.

So success starved have this football-obsessed nation been for the best part of a decade that they have slipped out of the discussion when it comes to major tournament favourites in recent years, but Roberto Mancini has them believing again ahead of Friday night's opener against Turkey in Rome.

The former Manchester City manager has the highest win percentage of any boss in the Azzurri's history, at nearly 72 per cent with 23 victories in his 32 matches in charge. That includes 10 wins from 10 in Euro 2020 qualifying - and he has lost just twice in three years in charge.

Failure to qualify for the World Cup in 2018 for the first time since 1958 was the culmination of years of regression for Italy. That Antonio Conte had got them to the quarter-finals of Euro 2016 with a team that was functional at best was more a testament to his managerial ability than the talent at his disposal.

The first decade of the 21st century represented a golden era for Italy, with the World Cup triumph in 2006 its pinnacle, supplemented by three Champions League wins for the Milan clubs and finishing runners-up at Euro 2000. They were runners-up again in 2012 but legends retired never to be replaced, with Juventus dominating domestically with a team full of foreign players, while failing to win the only two Champions League finals reached by Serie A sides since Inter's 2010 triumph.

It seems fitting then that Mancini takes a much-improved Italy to a major tournament in the same year that Juventus' run of consecutive titles was ended by Inter Milan - even if only one of Conte's title winners, Nicolo Barella, is expected to start for Mancini on Friday night.

In fact, only six players from Italy's traditional Big Three are in Mancini's squad - Leonardo Bonucci, Giorgio Chiellini and Leonardo Spinazzola from Juventus, Barella and Alessandro Bastoni from Inter and Gianluigi Donnarumma from AC Milan.

This is still a team lacking household names then - as it has been since the likes of Pirlo, Totti, Del Piero, Nesta and Cannavaro retired - but it is sprinkled with a new generation of attacking flair provided by Barella, Federico Chiesa and Sassuolo duo Domenico Berardi and Manuel Locatelli.

Mancini has forged a strong team spirit with no cliques - there are no more than three players from any one club - and there are only four players in the squad based abroad in the shape of Chelsea duo Jorginho and Emerson and PSG pair Marco Verratti and Alessandro Florenzi.

'Our chemistry is a kind of magic,' says veteran defender Chiellini, one of five players over 30 in a squad with a blend of youth and experience that, on paper at least, looks near perfect. Mancini showed with City and Inter that he knows how to build a winning squad and he has done so again with Italy - who he represented 36 times as a player between 1984 and 1994.

Mancini's preferred system with Italy is a 4-3-3, though he has experimented with a back three recently. Jorginho plays as the midfield pivot with Verratti dropping deep to help him dictate play, while Lorenzo Insigne and Chiesa - son of former Italy striker Enrico - provide goal threats off the flanks either side of Ciro Immobile or Andrea Belotti - both proven finishers in Italy.

There are weaknesses in the team, most notably at left back where neither Emerson nor Spinazzola are regulars with their clubs, while both Bonucci and Chiellini will have wished the tournament was played as scheduled last summer after indifferent seasons for their clubs as Father Time catches up with them. Verratti is set to miss the first two matches through injury, with Locatelli given a chance, while further forward in midfield Lorenzo Pellegrini's injury on the eve of the tournament is a blow.

Like with every team, the draw has a huge bearing on Italy's chances of success and it has been kind to Mancini. They should top a group also containing Wales and Switzerland, and will probably face Ukraine or Austria in the last 16 if they do so. From the quarter-final stage it gets tricky, with Belgium and France probable opponents in the quarters and semis, but Italy finally look ready to go deep into a major tournament again.