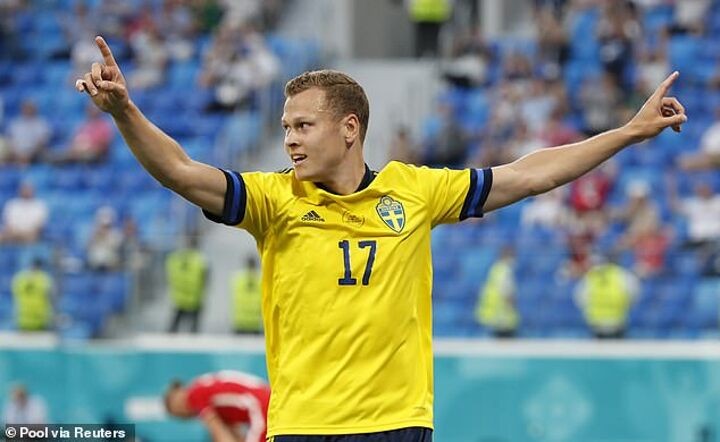 Robert Lewandowski came agonisingly close to inspiring Poland to one of the great European Championship comebacks but will reflect that his astonishing first-half miss may have cost his team a place in the knockout stages.

Trailing 2-0 to Sweden thanks to Emil Forsberg’s double, Poland were heading home with barely a murmur.

Then Lewandowski produced one of the goals of the tournament and scored his second six minutes from time, meaning another at that stage would have sent Poland into the last 16. In the end, though, Poland could not find another golden moment and substitute Viktor Claesson sealed top spot in the group for the Swedes and a last-16 tie at Hampden Park on Tuesday.

Meanwhile Lewandowski – one of the greatest forwards of his generation – will forever wonder how he headed against the crossbar from two yards in the 17th minute, with the goal at his mercy.

Forsberg had given Sweden the perfect start after only 82 seconds and made it two just before the hour mark with another classy finish. In a team of artisans, Forsberg is a genuine artist and now has three goals in Euro 2020.

He proved it here inside two minutes. The RB Leipzig player was lurking on the edge of the box after Alexander Isak tussled with Kamil Glik and collected the loose ball before gliding past Kamil Jozwiak and firing the ball into the bottom corner – the coolest of finishes in the 30-degree St Petersburg heat.

Only Lewandowski knows how he did not equalise for Poland in the 17th minute. His first header from a right-wing corner bounced up against the crossbar and with Robin Olsen out of position, Lewandowski somehow nodded the follow-up against the woodwork a second time from two yards.

That was the best chance Poland created in the first half, with a 20-yard effort from Piotr Zielinski in stoppage time – tipped over by Olsen – the only other serious attempt.

Zielinski tried again straight after the break only for Olsen to thwart him, and the Everton goalkeeper did even better to keep out a low drive from Grzegorz Krychowiak. In between those efforts, Wojciech Szczesny made a smart stop to deny Robin Quaison after some poor Polish play at the back.

Forsberg looked to have sealed the game just before the hour mark when substitute Dejan Kulusevski burst clear on the break and teed up his team-mate, whose aim with his right foot proved as true as his left, giving Szczesny no chance from 20 yards.

That appeared to be that – until Lewandowski made good his first-half error with a glorious goal, his second of the tournament.

The Bayern Munich forward ran on to Zielinski’s ball and drifted into the box from the left, then glanced up quickly and found the top corner with a wonderful swerving strike.

It gave Poland new heart and substitute Jakub Swierczok had a goal narrowly ruled out for offside, with the linesman’s decision upheld only after a lengthy VAR check. Lewandowski’s second, a calm close-range finish after some dreadful defending, meant one more goal would have taken Poland through.

But they could not carve out that decisive opportunity and with Poland’s defence nowhere, Claesson made it three for Sweden in stoppage time after more clever work from Kulusevski.