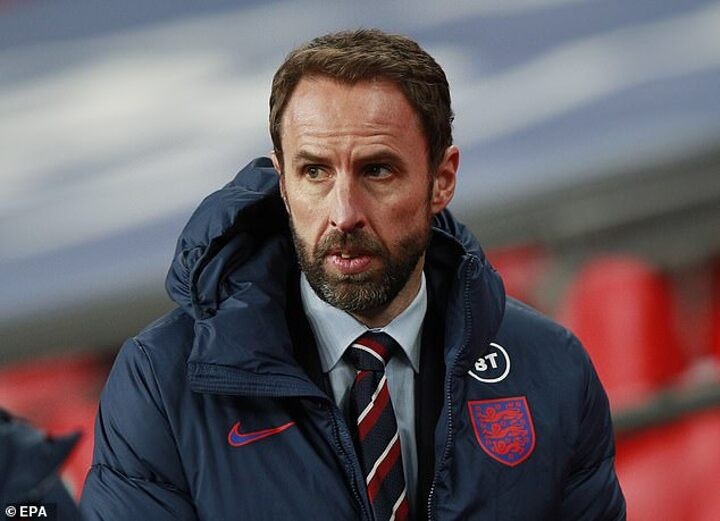 It's just 100 days until Euro 2020 gets underway. Nobody quite knows for sure where this summer's tournament is going to be played but it will definitely be happening somewhere.

For England manager Gareth Southgate, that means the final countdown to get his squad selection and strongest team sorted out before their Wembley opener against Croatia on June 13. Scotland and the Czech Republic are the other teams in Group D with them.

England have just five matches before then to fine-tune: Next month's trio of World Cup qualifiers against San Marino, Albania and Poland, plus June friendlies with Austria and Romania.

And Southgate has plenty of issues to resolve between now and England's Euro opener. That's not to mention factors beyond his control that throw up further headaches, such as form, fitness and Covid.

We take a look at some of the decisions Southgate will have to make between now and the big kick-off.

DECIDING ON THE DEADLIEST FORWARD LINE

Southgate has deployed a three-pronged forward line for a good while now, whether playing a 4-3-3 system or the 3-4-2-1/3-4-3 hybrid that has been favour over the past few months.

Assuming he stays fit - and the nation prays he does given he is absolutely essential to England's success - Harry Kane will captain the side and lead the forward line.

With a record of 32 goals in 51 international outings, the Tottenham striker is far and away England's deadliest threat even if he surprisingly failed to score in any of the autumn games.

The tricky part comes in deciding who occupies the two wide attacking positions, because England are blessed in this department.

There's Raheem Sterling, who could come into the tournament a Quadruple winner with Manchester City but also pretty fatigued, and Marcus Rashford, enjoying a very good season with Manchester United, competing for the spot on the left.

In the past, especially during the Euro qualifying campaign, Southgate fixed this by moving Sterling onto the right and he responded with some brilliant form.

But then that means ignoring Jadon Sancho, who is enjoying another productive season for Borussia Dortmund with 11 goals and 16 assists.

He's had to be patient for his England chances but is one hell of an impact player to bring off the bench.

But during the course of a tournament, which will see England play seven matches if they go the distance, all of Rashford, Sancho and Sterling will get their chance to shine.

You wouldn't wish to see any of them out of form or short of fitness because it's from this deep well of skill, speed and creativity that England can trouble any opponent.

As a result, you fear for the prospects of Chelsea's Callum Hudson-Odoi and United's Mason Greenwood. Neither are having the greatest of seasons and though they've had a taster of the senior set-up, they could be earmarked for the Under-21 Euros instead.

This takes a split format in 2021, with the group stages being played during the March international break and the knockout rounds in late May/early June.

WHO IS THE BEST BACK-UP FOR KANE?

So what happens if England's worst fears are realised and Kane goes down with an injury on the eve of the tournament?

In fairness, Southgate could do a Pep Guardiola and field a front three of Rashford, Sterling and Sancho in whatever combination.

But realistically there will need to be a central striker. At the moment, Everton's Dominic Calvert-Lewin is the best bet to provide back up to Kane.

He's scored 18 times for his club this season, remaining consistent throughout the campaign, and netted in the friendly games against Wales and the Republic of Ireland last year.

With Tammy Abraham struggling for game time under Thomas Tuchel, you start to fear for his chances. Similarly Danny Ings so long as he isn't scoring and Southampton are sliding down the table.

WHERE DOES MOUNT SLOT IN BEST?

Currently enjoying a brilliant season with Chelsea, you'd say Mason Mount is pretty close to being an assured part of the England team for the summer, let alone the squad.

The fact Southgate started him in the most demanding UEFA Nations League games against Belgium (home and away) and Denmark (home) in October and November suggests there will be a big role to play.

Mount has seamlessly made the transition from Frank Lampard to Tuchel at Chelsea with both managers - and Southgate - cherishing his work rate off the ball, passing and willingness to drive past defenders.

The question is, where does he slot in? It probably depends on England's formation. If it's a 3-4-2-1, then Mount will be in the two, quite similar to Tuchel's set-up, and tasked with supplying the forwards along with someone like Rashford or Jack Grealish.

If it's the 3-4-3 with more emphasis on width, he'll be more of a central midfielder with more donkey work expected alongside a Jordan Henderson, Declan Rice or Harry Winks.

It'll depend on the opponent on the day but the luxury for Southgate is that he knows Mount can perform both roles to a high standard.

So where does that leave everyone else?

Aston Villa's Grealish is sidelined at the moment but he could return for the March internationals. In the Nations League campaign, he gave Southgate plenty of food for thought with some great performances.

England just looked so much more creative when he was on the pitch with the away game in Denmark the best example. Trouble was, Grealish was introduced too late to make a difference.

Southgate didn't make that mistake in the later games and he too can play wide left in a front three or in the two.

Then there's Phil Foden. The 20-year-old was brought back into the England fold in November after his disciplinary incident in Iceland and he scored twice in the 4-0 win over Iceland last time out.

Since then, he's been top class for an all-conquering Man City team and pressing his case for inclusion hard. Foden only turns 21 in May and will hopefully have many more tournaments ahead but he could be the X-factor.

That means that Leicester's James Maddison, still with just one cap, might not make the cut.

Southgate may think a set-piece expert such as Southampton's James Ward-Prowse would be better use of a place in the 23 than another tricky creative player.

Right now, you'd say Grealish and Foden are the only shoo-ins.

GETTING THE MIDFIELD BALANCE RIGHT

It did take England a little time to readjust when Southgate returned to the three-at-the-back system for the start of the Nations League in September.

But this could also be put down to a general lack of international match practice after a 10-month Covid-induced pause.

In the games against Iceland and Denmark, though, there was no doubt England lacked drive going forward and were too conservative in midfield, so it's important Southgate gets the balance right.

In the stalemate away to Denmark, Kalvin Phillips and Winks were just too defensive minded. In the home game with the Danes, it was Phillips and Rice.

The central midfield pairing will set the tone and we'll probably see a combination of Rice/Winks alongside Mount/Henderson depending on the shape.

The worry with Liverpool skipper Henderson is the groin injury that will keep him out until at least April. He'll be in the squad if fit but how much match practice will he have by the time of the tournament?

At the moment, you'd say the childhood friends Mount and Rice would probably be the best partnership.

One area where England most definitely aren't struggling for options is at right-back or right wing-back as it could easily be.

Last year, Trent Alexander-Arnold, Kyle Walker, Kieran Trippier and Reece James all started in the position in the space of eight games. Against Denmark at Wembley, Ainsley Maitland-Niles ended up on the left.

Trippier also played on that side against Belgium, so a couple of the players are adaptable.

Southgate is a fan of Trippier but it remains to be seen if he'll get his Atletico Madrid spot back after his suspension. James might not play as often for Chelsea and Alexander-Arnold's season has been injury-disrupted.

With three central defenders, you want a player who not only covers effectively but can also get forward without being asked twice and deliver good crosses. It's a demanding and important role.

On the left, Bukayo Saka could well be ahead of Ben Chilwell in Southgate's options after his fine season for Arsenal.

THREE IN DEFENCE OR FOUR?

It appears absolutely certain that Southgate will play with a back three, as it worked well at the 2018 World Cup, rather than the traditional English back four.

If he changes his mind again, it will render all the work getting the players used to a back three again during the autumn matches pretty pointless.

There are pros and cons to both systems but using three central defenders does allow additional security and allows the attack-minded wing-backs to do their thing.

So who plays there? Southgate will be encouraged by the way Harry Maguire has recovered from his early-season problems at Manchester United and will like his ability to carry the ball out of defence.

Maguire is never going to be the quickest but if there are two others to cover it's less of an issue.

John Stones is having a great season for Man City and that has come at the right time for England. He'll likely be back in for the March games having last played in the 7-0 win over Montenegro in November 2019.

Joe Gomez is likely to be ruled out with injury but there are some decent options for the third spot. Eric Dier may need to rediscover his early-season Tottenham form, while Michael Keane, Tyrone Mings and Conor Coady could all do a job.

There's also the possibility of the experienced Walker playing the right-side of the three as he did in 2018.

If you put Maguire, Stones and Walker together, surely not much could go wrong. Surely?

Despite all the question marks over his sometimes erratic Everton form, it appears still be be case closed that Jordan Pickford is England No 1.

Southgate values him highly and though Nick Pope and Dean Henderson may have sensed their opportunity ahead of the tournament, it's unlikely there will be any change between the posts.

Consistency is probably the best policy in this regard.