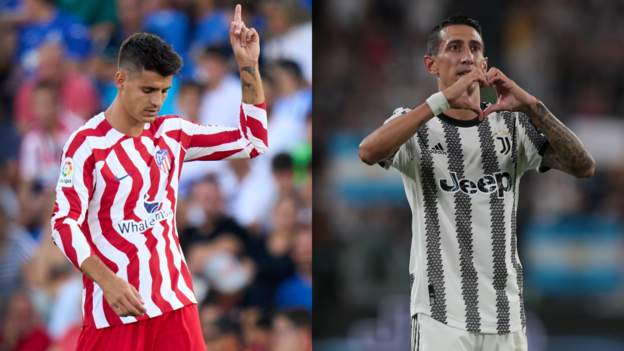 A reported transfer target for Manchester United, Morata bagged a goal in each half against Getafe before Antoine Griezmann netted a third.

In Serie A, Di Maria opened his Juventus account with a close-range volley in a 3-0 win against Sassuolo.

The Argentine joined the Italian side on free transfer after leaving Paris St-Germain.

Dusan Vlahovic added two more for Juve, hitting the first from the penalty spot and a second when he latched on to Di Maria's pass at the back post.

"How do I feel playing with Di Maria? It is an incredible feeling, it is a great pleasure to play with such champions, I thank him for the assist," Vlahovic said.

"He played an extraordinary match."

Elsewhere in the Italian top flight, Napoli rose to the top of the table as they produced a 5-2 comeback victory over Verona with five different goalscorers.

After a two-year loan spell in Serie A at Juventus, Morata helped give Diego Simeone's Atletico side a winning start when he fired home a shot from the edge of the penalty area after 15 minutes before drilling the ball into the top corner in the second half.

"I'm very happy to be back here and because it's always good to start the season on the right foot with a win in a very difficult stadium to play in like Getafe," Morata told Movistar Plus.

"I love playing for Atletico, I'm here to leave everything on the field, to work hard and compete."