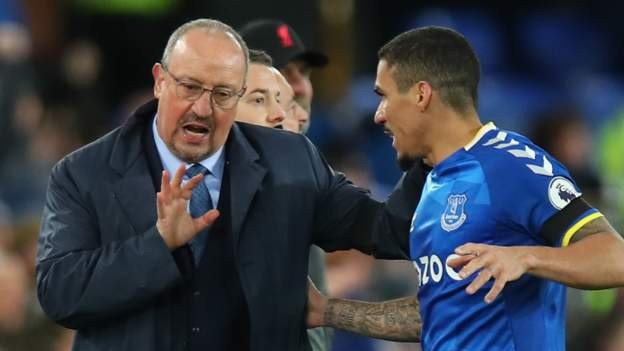 Everton chairman Bill Kenwright claimed lavishly earlier this year that other clubs look admiringly in the direction of Goodison Park's boardroom when examples of how to conduct their affairs are required.

Kenwright stated: "One very famous football club said to me two or three days ago 'whenever we have a problem we say 'what would the Everton board do' because they always get it right?'"

On recent evidence, "always" is rather a stretch and it is to be hoped this club did not gaze too longingly at Everton's board - for their own peace of mind if nothing else - because they have got precious little right for a very long time.

In fact, this nameless organisation might have been best served doing the complete opposite given the recent dismal track record at Everton.

Kenwright's message certainly seemed lost on those Everton supporters in mutinous mood at the end of a 4-1 home derby defeat by Liverpool as they made it clear they were wondering what the club's board were planning to do about the hot mess they find themselves in after spending almost half a billion pounds.

They were certainly not congratulating Kenwright and his colleagues on always getting it right.

Everton supporters in the beating heart of their fanbase, the Gwladys Street End, unfurled a large banner criticising the board when Liverpool raced into an early 2-0 lead. It referred to the club's motto "Nothing But The Best Is Good Enough" and read: "We Demand Nil Satis Nisi Optimum. It's About Time Our Club Did Too".

The real hostility and fury was reserved for the final whistle.

There were loud chants of "sack the board" with Kenwright and director of football Marcel Brand particular targets for what might politely be described as "colourful" words from furious supporters gathered near the directors' box as they made their way out.

Benitez history a 'sideshow' in derby

At the epicentre of this wave of discontent is manager Rafael Benitez, a high-risk appointment unpopular with many Everton followers and now presiding over a worrying decline of eight games without a win after a bright start.

This had the potential to be a very uncomfortable night for Benitez, a Champions League and FA Cup winner with Liverpool but never forgiven by many of an Everton persuasion for describing them as a "small club" in 2007. And so it proved.

It is a tired old battle that is barely worth revisiting now because Everton's problems run a lot deeper than an unflattering remark made 14 years ago.

Benitez was inevitably going to provide a sideshow as the first man to manager both clubs since William Edward Barclay in the 1890s and this was an open goal for gloating Liverpool fans once Jurgen Klopp's team took charge inside the first 20 minutes.

The loud chants of "Rafael Benitez" started in the small corner of Goodison Park housing Liverpool's followers and concluded with a brutal "Rafa's at the wheel" when the formalities were done and dusted.

This was always going to be something Benitez would face if he failed to get off to a good, sustained start but in any list of those responsible for Everton's current plight, the manager would be near the bottom.

It looked like Everton's fans felt the same as it was the board, particularly Kenwright and Brands, who took most of the flak here. Kenwright's defence, although few were listening as he returned to the sanctuary of the boardroom, is that he has now ceded most of his power to owner Farhad Moshiri, who was, perhaps luckily for him, not in attendance on Wednesday night.

Benitez has made mistakes and must get more out of a squad that is better - although no-one can be sure by how much - than the recent run of abject performances suggest. He is renowned as a master strategist but Everton have lacked direction so he must take responsibility.

In his defence, however, is the fact that he has been without the spine of his team for large parts of this season.

Yerry Mina was still missing here and England striker Dominic Calvert-Lewin has been a long-term absentee since scoring three goals in three games yielding seven points at the start of the season.

Abdoulaye Doucoure was also out for several weeks after an outstanding start to the campaign.

And this hints at the paucity of depth in the squad Benitez inherited at the start of the season, when he was then hamstrung by Financial Fair Play regulations that only allowed him to spend £1.7m on Demarai Gray, Everton's scorer here, and bring in Andros Townsend, Salomon Rondon and keeper Asmir Begovic on free transfers.

This squad needed a serious overhaul, which Benitez will know, but he has been left an almost non-existent transfer budget because of the profligacy of previous regimes, with hundreds of millions squandered under Ronald Koeman, Sam Allardyce, Marco Silva and Carlo Ancelotti.

Moshiri and his boardroom cohorts oversaw a scattergun, wasteful transfer policy lacking any sort of structure, with no-one quite sure of how much influence Brands wields any more, and the fortune that came to Goodison Park when the saviour arrived has been spent fruitlessly in large part.

The reaction at the final whistle seemed like a moment of significance when patience finally snapped, not helped by the sight of Klopp fist-pumping in triumph in front of Liverpool's elated fans.

Make no mistake, Everton's board have allowed a crisis and a transfer straitjacket to grip the club on their watch and they cannot simply use Benitez as a human shield for their own failings.

Of course the pressure will increase on Benitez because of results, who he is and his Liverpool lineage - but are Everton seriously going to sack another manager only months after he arrived and 14 games into the new season?

It would be an act of panic under pressure but such is Moshiri's volatility no-one can predict with confidence what he will do. While it might satisfy some fans, it would be very harsh on Benitez, who deserves longer to put his stamp on affairs at Everton, but there is an element of the club's support he will never convince. It is a problem that will bubble to the surface every time Everton lose and they are currently losing rather a lot.

What is beyond dispute, however, is that Benitez now faces a crucial match at home to Arsenal next Monday night. The mood at Everton is currently toxic and when boards come under attack from supporters it is often the manager who suffers.

The scenes at the final whistle suggest the match against the Gunners is a game Everton and Benitez cannot afford to lose. Victory would release the pressure valve, temporarily at least - although whether it does much for a board that felt the fans noisily turning against them after this damaging defeat is another question.