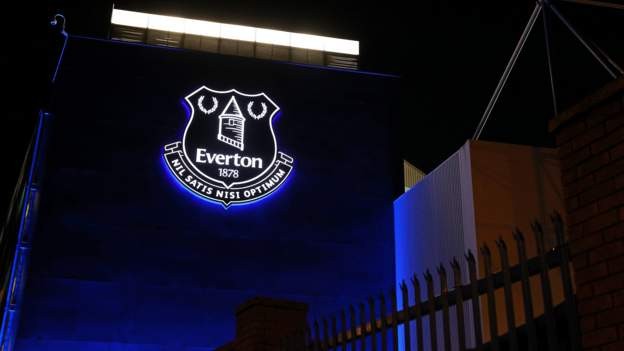 An Everton fan has been given a three-year Football Banning Order (FBO) for anti-Semitic chanting during the club's Premier League game against Tottenham.

Michael Campbell, 44, of Aigburth Road, Liverpool was issued with the ban for shouting slurs towards Tottenham fans at Goodison Park on 7 November.

Campbell was identified by witnesses, arrested and charged following an investigation with Everton.

He appeared at South Sefton Magistrates Court in Bootle on 20 January.

Campbell will be banned from attending any regulated football matches during that time. He was also ordered to pay a fine and court costs.

Everton said "the incident took place in the Sir Philip Carter Park End Stand, near the divide with the away supporters, where the offender repeatedly shouted anti-Semitic insults".

Fan charges and arrests after objects thrown at Everton and Tottenham

The club's statement read: "While the behaviour of this individual does not represent our passionate fanbase or the values of our football club, they will not be tolerated or welcomed at Goodison Park.

"Everton is an inclusive football club that celebrates the diversity of all football supporters, players and staff."

Detective Inspector Steven O'Neill said: "Hate crime in all its forms simply will not be tolerated and I hope this result sends a clear message that anyone found to commit hate crime offences anywhere on Merseyside will be brought to justice.

"Campbell will now have a criminal record and the consequences of this in the future could prove to be significant."