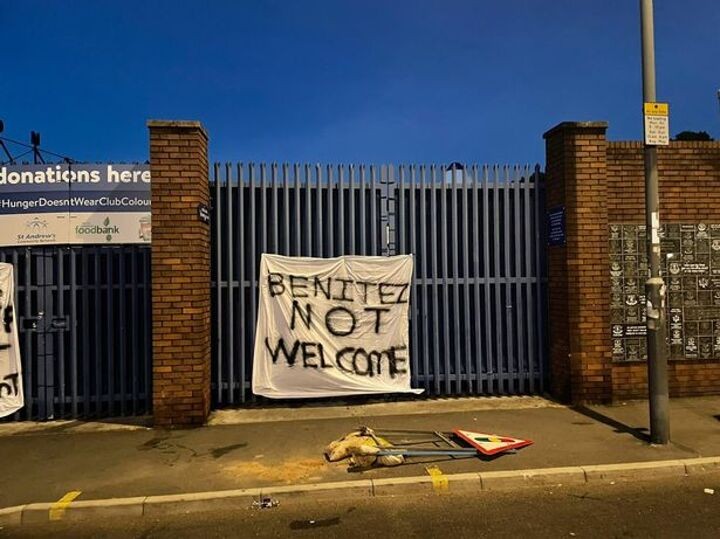 Everton fans have made their feelings clear about Liverpool legend Rafa Benitez being in talks to be theclub's next manager by hanging x-rated banners at Goodison Park.

Reports have suggested Benitez is discussing a potential move to the Toffees after Carlo Ancelotti departed earlier this month to take charge of Real Madrid.

However, supporters are not onboard as the Spaniard is still celebrated at Anfield for his heroics while manager from 2004 to 2010.

During his time with the Reds he won the Champions League and even called Everton a "small club" after drawing 0-0 with them in 2007.

The fans have displayed their anger by hanging banners that say "Benitez not welcome" and "F*** off Benitez you fat Kopite c***".

The move for Benitez would work well for him as his family are still based on Merseyside and the Toffees could reap the rewards of his experience as he has also been in charge of Inter Milan and Real Madrid.

However, ex-Everton star Neville Southall has said the appointment should not go ahead.

He told talkSPORT: "I think Rafa Benitez is a good manager, but is he right for Everton? No. Not a chance! He's Liverpool, the fans won't have it.

"So, for me, I would rather have Duncan Ferguson (the former Everton striker and Ancelotti's assistant manager).

"We're never going to get relegated and he's a good manager, I think he's far underrated than anyone else.

"He started before Carlo Ancelotti and put us on a good run, he's knowledgeable in everything he does, he knows the club inside-out, he knows all the younger players, so why not give him a season's contract?"

Benitez isn't the only candidate Everton are looking at as a shortlist of bosses has been drawn up by their director of football Marcel Brands.

Among the possible managers is Brighton and Hove Albion's Graham Potter and Belgium's current boss Roberto Martinez, who earned his side a last 16 Euros spot yesterday after coming from behind to defeat Denmark 2-1.

But Toffees owner Farhad Moshiri has furthered talks with Benitez, holding multiple meetings with him, and the deal is said to be almost over the line.

The need for a new boss came after Ancelotti abruptly left the club to replace Zinedine Zidane at his former side Real.

He said upon leaving: "I would like to thank Everton FC, my players and the supporters for giving me the opportunity to manage this fantastic and historical club.

"I decided to leave as I have a new challenge with a team that was always in my heart, Real Madrid."