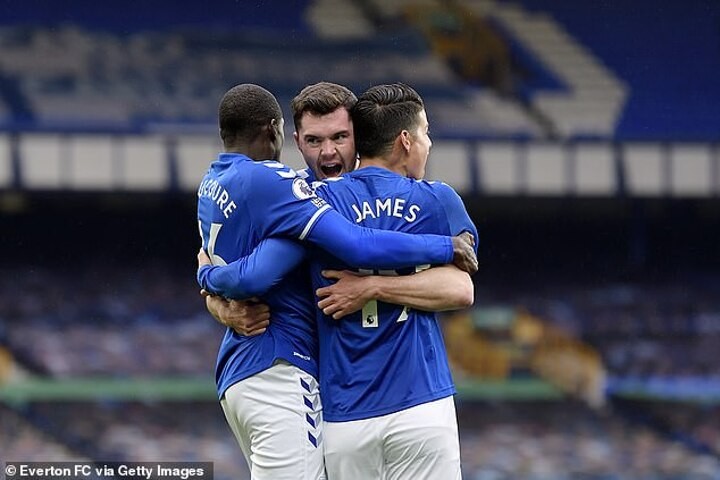 The list is quite long. Roberto Martinez, Ronald Koeman, Sam Allardyce, Marco Silva. Recent Everton managers who never won a game against Liverpool. Carlo Ancelotti remains on it, but maybe not for long.

Leaving the controversy aside for a moment, this had the feeling of a watershed event for Everton, and their latest manager. It was, in many ways, a throwback.

Ancelotti was no doubt too busy with his own career to pay close attention to the nuances of the Merseyside derby, but its decline has been a great sadness of the modern Premier League era.

For a decade, maybe more, Everton have stopped playing Liverpool as equals. They play them as underdogs, like it is a cup fixture.

It does not mean that they do not compete. Liverpool have not won at Goodison Park since December 2016. Yet it is an inferior form of competition, one built largely on absence of ambition and the desire to frustrate and nullify a superior opponent.

Even at home, Everton played Liverpool as if they were hoping to nick a draw and get them back to their place. And on Saturday, that changed.

Everton got lucky, too. That much is indisputable. Jordan Pickford should have been sent off in the opening 10 minutes, Virgil van Dijk was kicked out of the game — and perhaps the season — and there are telescopes at NASA that would not be able to identify why Sadio Mane was offside for what should have been Liverpool’s late winner.

Yet, there were periods when it was Everton on the front foot, when Everton’s urgent passing triangles caught the eye, when Everton demonstrated the ambition of a team at the top of the table.

Ancelotti has delivered that for them. The change in the narrative, the recalibration of targets. He is not going to play Liverpool as if in awe of them. He will not aim to keep them at arm’s length.

Ancelotti appeared before the cameras, post-game, coolness personified. Jurgen Klopp had already been hurried away before he began chewing the furniture.

Obviously, as the beneficiary of much that was controversial, Ancelotti was in a very different place. Even so, there was measure in his voice; the measure of a man who had been coaching at an elite level all his career, and wasn’t about to settle for less than what he had just seen.

‘We have improved,’ he stated, simply. ‘We competed well, we competed properly. This doesn’t mean we are at the same level as them. We are not. It is difficult. But it could be a target for us.

‘Like an old Merseyside derby. It’s time to think we could win. It’s too much, too long, that Everton are not able to win a derby.’ October 17, 2010, as the red half of the city is fond of reminding the neighbours, against a Liverpool team with Roy Hodgson as manager and Paul Konchesky at full back.

Brendan Rodgers never lost to Everton, and neither has Klopp, yet this was far closer to a derby from the days of Howard Kendall and Kenny Dalglish. The blood and thunder element has always remained, but Everton’s technical level is rising, as is their sense of self.

They are steered by Ancelotti now, not fireman Sam. They are looking up, towards possibilities, not anxiously behind to the void.

And plainly, it would have been very different had Michael Oliver, the referee, dismissed Pickford for an horrendous challenge on Van Dijk, who left the field after 11 minutes. Indeed, it is inexplicable that he did not when one considers the minute margins that VAR feels empowered to address these days.

Later in the game the same technology would disallow a Jordan Henderson goal for an offside that Klopp said could not be identified by any observer he had spoken to, including neutrals in the media.

Certainly, it was perplexing watching at home. No doubt there is a still capture somewhere that explains the decision. It will not, however, be a clear or obvious call.

Pickford’s challenge on Van Dijk, however, arrived like a sledgehammer with all the attendant subtlety and mystery. So how is there nobody in front of a video screen who can set the slide rule aside for one second and remind Oliver to not forget the very obvious?

Pickford had to go. In any other area of the field, he would have gone, and it does not matter that offside had been given and the ball was dead. Reece James was sent off after the final whistle for England; West Bromwich manager Slaven Bilic was sent off during half-time. The suspension of play does not give anybody a free hit.

Pickford was guilty of a violent tackle and severe injury to Van Dijk was the consequence.

That Oliver did not even consider the incident worthy of a yellow card, and was not then alerted to his oversight, shows how lost in the woods VAR has become. It should not just be Liverpool asking for a review. It will be Everton another day.

Back to the match, and it wasn’t only Ancelotti noting the change of dynamic on Merseyside. Andrew Robertson, the Liverpool full back, also offered a positive update, even though an element damned with faint praise.

‘Goodison is never an easy place to come, but Everton have improved so much,’ he said. ‘They have made good signings and have obviously got a fantastic manager. They’ll be up there this season, certainly in the top half when they weren’t the last couple of seasons.’

One imagines, Ancelotti’s aim is a tad higher than 10th, or a slight improvement on last season’s 12th — particularly as the run that has seen them reach the top of the league includes matches against two of the famed Big Six.

‘The level we have reached is a good level, but the problem for the season is the consistency the team need to have,’ Ancelotti added.

He is right, of course. We are yet to see what happens when Everton are without one of their key figures, as they will be with Richarlison now banned for a very poor challenge on Liverpool’s classiest player, Thiago.

Yet Ancelotti is getting peak form from Michael Keane and Dominic Calvert-Lewin, while Allan and James Rodriguez have greatly improved disparate elements in midfield.

We can argue about fortune and justice, but they will always be present when matches are won or lost. It was the belief of the blue team that was new at Goodison.