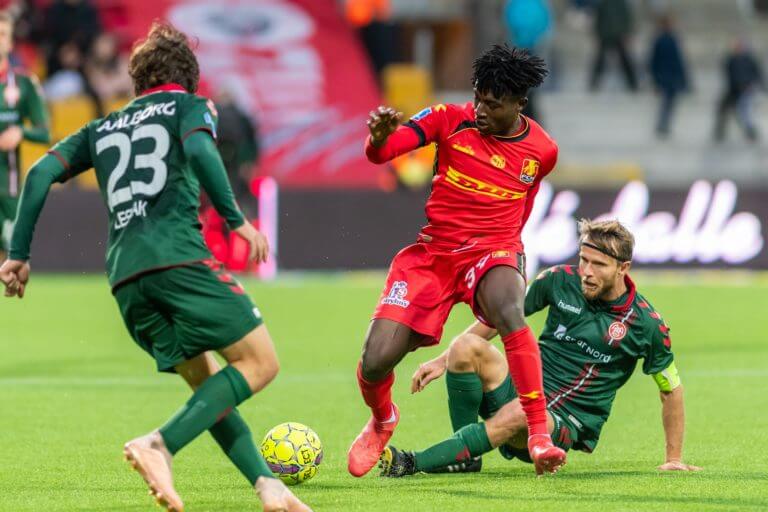 Tottenham and Everton have been handed a massive boost in their hot race to sign Ghana teenage prodigy Mohammed Kudus as the hugely talented playmaker can now get an automatic work permit to play in England.

The 19-year-old, who is Ghana full international, has attracted interest from clubs from all the top five leagues in Europe - England, Spain, Germany, Italy and France.

His explosive form for Danish top-flight side Nordsjaelland this season attracted clubs to his talent which has resulted in the big chase for his signature in the upcoming transfer window.

Tottenham and Everton are the English clubs among the more than ten teams in Europe seeking to sign the powerful midfielder but stringent work permit rules threatened to scupper their plans.

But British lawyers have now revealed that the Ghana teenage prodigy will qualify for an automatic work permit because of lenient conditions for talented U20 players.

Players without EU passports need to play 75% of matches of their senior national team matches two years before applying for the permit and their country must be among top 50 in the world.

But talented U20 players need just one year of 75% of matches of the senior national team matches of a country among the top 50 in the world, to qualify for an automatic work permit.

With Ghana currently ranked 46th in the world and having played both matches of the Black Stars in the past one year, Kudus would qualify for an automatic UK work permit to play in England.

This is a major boost for Tottenham and Everton as they will not fully enter the race to grab the player who has been one of the best players in the Danish top-flight this season.

This led to his maiden call-up for the Ghana senior team and he justified his invitation in his first appearance for the Black Stars when he scored a marvelous goal against South Africa in November last year in an Africa Cup of Nations qualifier.

Tottenham and Everton have done well to develop young talents into first-team stars over the years and they will be hoping to do the same with Kudus if the transfer goes through.

As for the player, he might be tempted to move to England because of the huge popularity of the English Premier League in his native Ghana.

He will know that a top class youth setup and a first-team manager like Jose Mourinho or Carlo Ancelotti  could help him fulfill his potential in future.

The highly-rated midfielder can play as forward as well. However, he is at his best as an attacking midfielder.

He has been in fine form since moving to Denmark in 2017, and made 26 appearances last season to help his side finish sixth in the Danish Superliga.

He shot to prominence after excelling at the FIFA U-17 World Cup in 2017 in India and was the star of the Black Satellites team at the Africa Youth Championship in Niger in February last year.